A sequel to the hit slot Football Star, Football Star Deluxe improves upon the sequel in every way. You can play with 18, 38, 68 or 88 paylines with multiple different features as well.

Developed by Microgaming, this slot can award players up to 3,200x your stake and has multiple features to help you along the way. Return to the pitch and see if you can score big.

“ If you love slots and football - this game is one for you! ”

There are so many different features within this slot and it all begins with the Rolling Reels. You can win multiple consecutive wins and the winning symbols are removed to make way for newer symbols.

Football Star Deluxe also features traditional wilds but they super stack in base games and in free spins. They can substitute any other symbol except the scatters. Football players can appear randomly in the base game and turn reels 2, 3 or 4 wild for a guaranteed win.

Perhaps, the biggest feature has to be the free spins round. This is triggered by landing 3 or more scatters and leads to growing wilds and a multiplier trail. Now the multiplier trail increases with each roll and begins at 2x and can go up to 8x.

The growing wilds on the other hand are super stacked on reels 2 to 5 during free spins, and they grow by 1 with each spin. 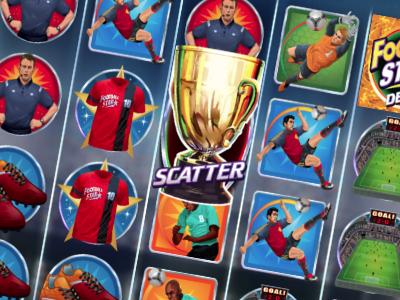 Landing 3 or more scatters can trigger the free spins round with up to 12 free spins. This bonus round also features growing wilds and a multiplier trail. 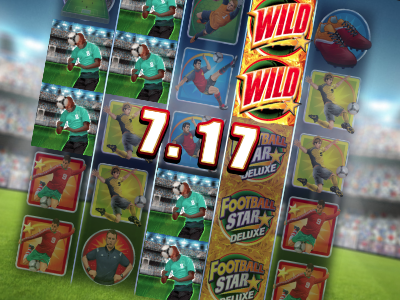 In this slot, you can expect multiple different wilds. From the growing wilds to the super stacked ones, you'll be scoring a hat trick in no time with all the wilds.

Whether it's through the multiple wilds or the free spins round, you can win up to 3,200x your stake in this slot. So return to the pitch and see if you have what it takes to bring home victory.

Like most football slots, the background features a pitch with blurred audiences in the distance. The reels are centred in the middle of the pitch with various different football-inspired symbols.

There a subtle beat in the background that's funky and a little odd - but we enjoyed it. This isn't the best-designed slot but it's charming enough.

The core mechanics of this slot is simple. However, the biggest difference comes from the selected paylines. You can choose between 18 to 88 paylines on this slot.

All the menus you could need can be found on the right side of the screen. The spin button is in the middle with the autospin just above it.

With a high RTP of 96.88% and a high volatility level, Football Star Deluxe is a slot for high rollers who have the bankroll to sustain them. Expect less frequent wins but they'll be higher when they do.

The maximum win for this slot is 3,200x your stake which can be won by landing the x8 multiplier in the free spins round.

Microgaming are a renowned developer and we're not surprised that Football Star Deluxe is a lot of fun. The variety of wilds, the multiplier trail and the free spins round are superb and add so much to the gameplay. Whilst the visuals aren't anything spectacular, they deliver just want you to want for a football slot.

Of course, the payout is lower than we'd expect, but the high RTP raises up the win potential. If you love football and want a decent slot to play, then definitely give Football Star Deluxe a spin.