Play'n GO have this month added to their ever-growing stable of popular online slots that pay tribute to renowned real-life rock and metal bands.

This is the sixth game in their series of music-inspired slots, having released five other titles that are themed around famous bands including British rock band Demon, Sabaton, Doom, Testament and Black Mamba.

Their latest release, Annihilator, a highly volatile 5-reel, 10 win line slot, is named after the famous Canadian thrash-metal band and boasts features that will prove more than enough to draw you in... Even if you're not a fan of this genre of music.

You could be forgiven for not knowing who Annihilator are, despite having been around for some while (35 years to be exact), they've never really made the biggest impact on the rock and metal landscape, with the majority of their success coming overseas in Asia and Europe.

That said, their guitarist Jeff Walters has certainly made more of an impact on his own, having been the only real mainstay.

Famous bands such as Slipknot, Nickleback and Three Doors Down have all cited the guitarist as an inspiration when writing their own music. It comes as no surprise whatsoever that Jeff himself features heavily in this slot.

Despite limited success, Annihilator have slowly become one of the biggest selling Canadian Metal band of all-time. Whether that says more about the Canadian rock and metal scene then anything else... Well, we'll let you decide.

What can I expect from Play'n GO's Annihilator?

Ultimately, it's a pretty straight forward online slot with an RTP of 96.2%, it's fair to say that game is fairly standard as far as Play'n GO slots go... But don't take this as a negative, this developer's standards are incredibly high, and their games are always a delight to play.

The game has quite a spooky demeanour about it, with the reels being set in front of what looks to be a haunted house. The symbols also give off quite the ominous vibe, with the low paying symbols splattered in blood. 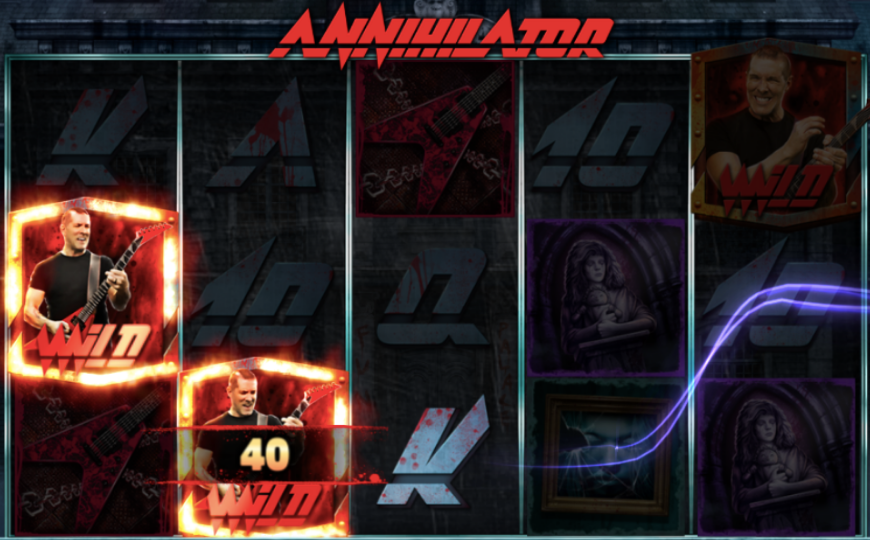 What bonus features does Play'n GO's Annihilator have?

Annihilator's three bonus features are named after three of the band's most famous songs from their 17 studio albums. These are In Command, Set the World on Fire and Fun Palace which do the following when activated:

Of course, like all of Play'n GO's fantastic rock and metal themed slot games, you'll be able to listen to a collection of hits. In this case you can enjoy songs from Annihilator's 2020 album Ballistic, Sadistic whilst you're spinning the reels.

Annihilator has something for everyone says Play'n GO chief

Martin Zettergren, CPO of Play'n GO spoke about the unique collaboration between the Swedish developers and the band, as well as the game’s appeal to fans and the wider audience:

“There was a real collaborative effort to give this game its level of realism and detail, which included visiting Jeff’s UK studio to capture the voice and video recordings; we worked together every step of the way."

“Music fans will love the nods to their iconic songs, albums and characters throughout the game. At the same time, slot lovers will enjoy the fabulous gameplay and the variety of unique features that the game contains. There really is something for everyone.”

Where can I play Annihilator?

Perhaps you're looking for a good no wagering casino offering wager free spins to play this devilishly dark Play'n GO slot game at? We've got you covered! You can play this, and many other brilliant games at Videoslots, PlayOJO and Party Casino.

Play Annihilator at these no wagering casinos:-