We'll be honest, there's not a whole load of football themed online slot games out there for casino enthusiasts to sink their teeth into, as they only seem to come around during World Cup or European Cup years... However, when they do arrive actually in casino lobbies there's no denying it, they're a LOT of fun!

Here at no wagering, we LOVE football... So we're absolutely delighted have compiled a list of our favourite football themed slot games, however we're not done there! We've also listed the no wagering casinos that you can play these games at! 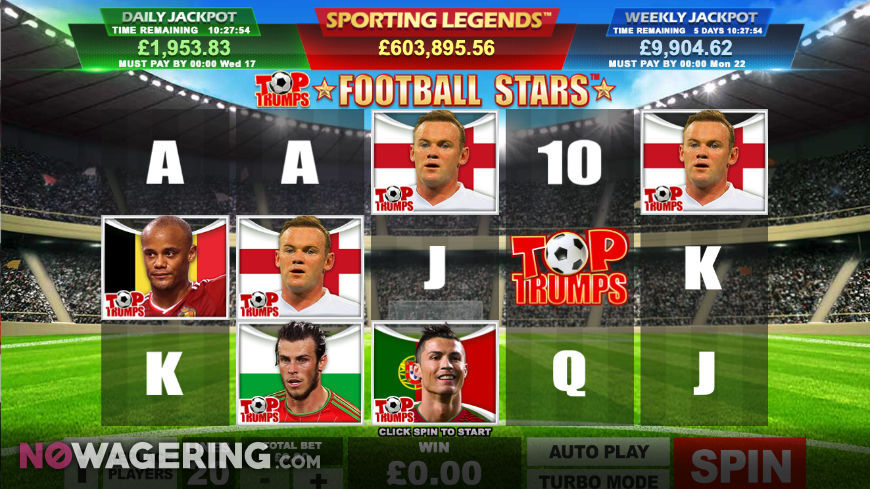 Based on the iconic card game of the same name, Playtech's Top Trumps Football Stars: Sporting legends is without a doubt one of the best football themed online slots we've played to date.

Before you begin spinning the reels you're given the opportunity to pick five of of your favourite footballers from a pool of 30 stars to make up the high paying symbols during the game. You start off with Cristiano Ronaldo, Lionel Messi, Neymar, Sergio Ramos and Manuel Neuer (We switched it up to include some of our favourite players).

This 5-reel, 20 win line game has a number of attractive features built in including respins, sticky wilds and a free spins round. The Free Kick Respin feature sees a football bounce onto the reels, if it lands on a player symbol it'll turn into a sticky wild before a respin is awarded.

Finally the Football Trophy bonus feature is a pick and click round in which players are shown a selection of 21 cards. Behind each player is either a cash prize, multiplier or more picks. At least one of the cards is a highly lucrative 'Win All' card.

Most impressively Football Stars also offers the players the opportunity to win a daily, weekly or Sporting Legends progressive jackpot prize – these are won randomly on any spin. Overall it's an enjoyable game, one well worth playing if you're a football fan... Even if it is slightly dated now! 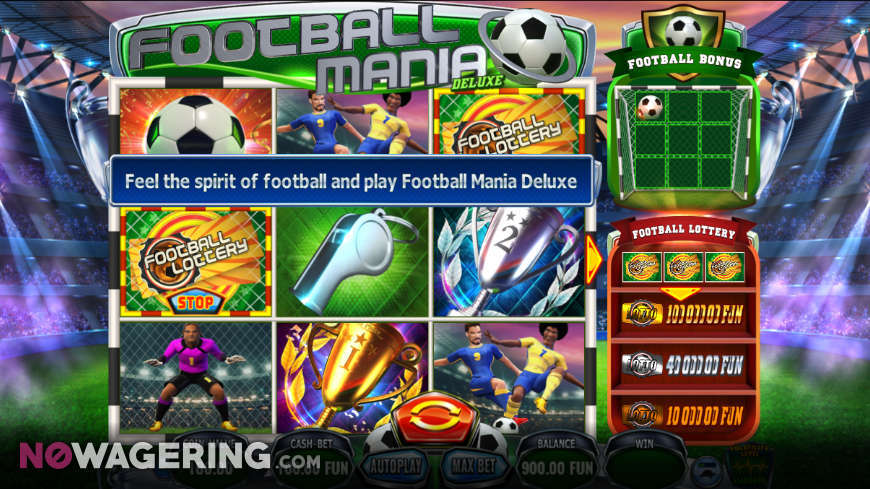 Wazdan's 3 reel Football Mania Deluxe really does break the mould as far as unique online slots go. Instead of  This slot is a strange hybrid of old and new, on one hand it has very few reel and unique symbols... On the other hand it's stacked full of genuinely thrilling bonus features.

Football Mania Deluxe's features include Volatility Levels, which allow players to set the game to their style of play, a Gamble feature that allows players to risk their winnings by taking a penalty against a goalkeeper for double the prize. The Blocked Reels feature sees the best set of symbols frozen into place after each and every spin, boosting players' chance of landing a winning combination.

There are two exciting bonus rounds to this game, the slightly unimaginatively named Football Bonus that sees footballs fill a separate table to the side of the reels whenever one lands during normal play. Once the table is filled, the next spin that shows at least 3 footballs on the reels will automatically launch 9 lucrative bonus spins.

The Football Lottery bonus is a pick and click minigame that occurs when the football lottery symbol lands on the middle reel. Players can choose from one of three tickets that reveal a random prize.

If you like games that offer something different to what you'd normally play then Football Mania Deluxe is well worth a spin. 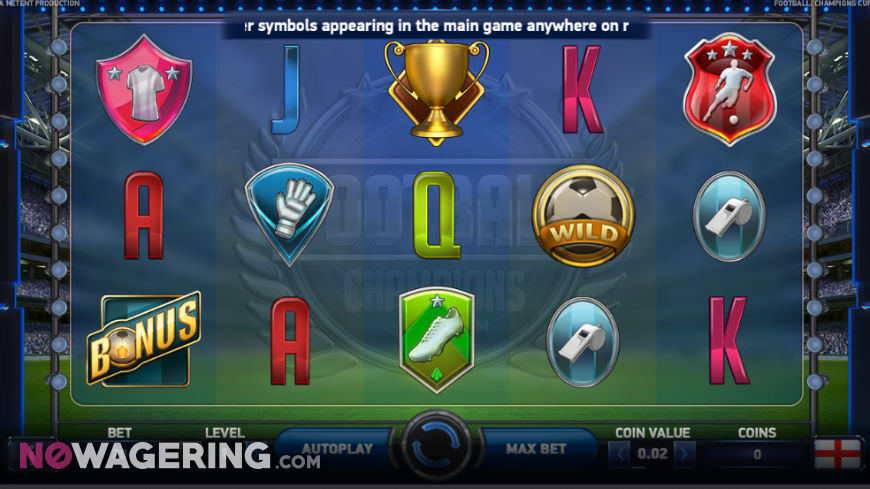 Interestingly, before the game begins you get to pick which country you want to represent whilst spinning the reels, there are a number of famous footballing nations to choose from. This doesn't have too much bearing on the main game until you reach the exciting bonus feature when you land three scatter symbols on the reels.

The Free Spins Tournament is one of two main attractions in this game. You're sent into a full-blown World Cup style knockout tournament. Every free spin during this bonus round emulates a football match, if you win you advance to the next round which results in re-triggering the feature.

During this feature Scoring Wilds also appear... Scoring Wilds activate goals for both yours and the opponent’s teams, depending on where the symbol lands.

The other main feature in Football: Champions Cup is the Penalty Shootout bonus round that occurs when 3 or more bonus symbols land on the reels. This launches a penalty shootout minigame that sees the player take 5 penalties and attempt to save 5 penalties by choosing one of four pre-set positions on goal.

Each goal that goes into the back of the net adds to your overall win, whilst each save adds a multiplier.

We can't hide the fact that Football: Champions Cup has certainly aged over the years, however it has a real charm to it that makes it stand out amongst other football themed slots. The bonus rounds alone make this title a must play game. 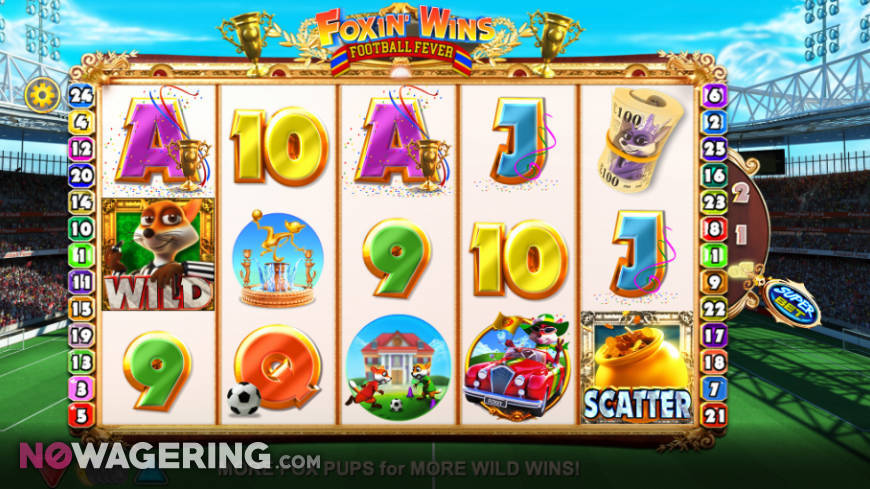 Foxin' Wins Football Fever is a 5-reel, 25 win line sporty spinoff of the popular Foxin' Wins series created by NextGen. It's fair to say that despite being a football themed slot this title is more about Mr. Fox and his family than it is the beautiful game! However don't let this deter you from playing this fun-filled slot! The fact you only have to land 2 high paying symbols on the reels to register a big win in this game makes it all the more exciting.

There's no doubt that long-time fans of the Foxin' Wins series wil be playing this title for its innovative Superbet feature. This ups the price of each individual spin, but promises more fox pup wilds on the reels as you play, which of course leads to much larger wins in the long run.

There are also two random bonuses that can launch during normal play in Foxin' Wins Football Fever, these are Fox Funds and Leprechaun Shakedown that both pay out random cash prizes if launched. Of course there's also a Free Spins feature that begins when players land three gold pot symbols. Foxin' Wins Football Fever's free spin round offers 10 free spins with a 2x multiplier, however, players can re-trigger this feature to get 20 free spins in total which is very nice!