When we think of online slots the first thing that usually comes to mind are the reels that play host to a selection of winning symbols, however not all modern slot games utilise these nowadays.

There are a growing number of exciting and innovative new games that utilise a cluster pay mechanic instead of having traditional reels that pay out from left to right. Games with cluster pay mechanics pay out when there are a number of the identical symbols clustered together in the same area, both vertically and horizontally. The bigger the cluster, the higher the payout!

World renowned slot developers NetEnt are currently kings of the cluster, having been the very first company to develop games that utilise this unique mechanic, however a whole host of developers have since had a go at creating some brilliant cluster pay slots themselves.

Feel like trying something new and giving something a little out of the ordinary a spin? Forget those traditional titles for a while and try out some of the best online slots with cluster pay mechanics you can play at our favourite no wagering casinos. 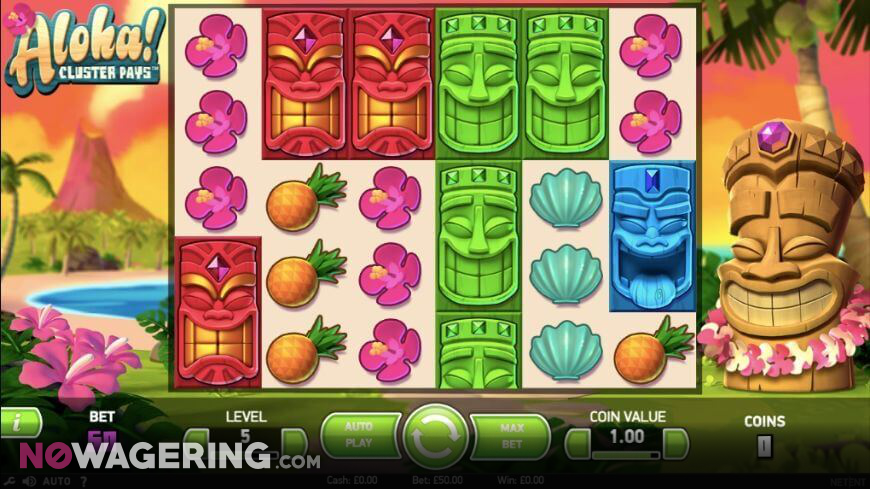 NetEnt's vibrant Hawaiian themed slot Aloha! Cluster Pays does exactly what it says on the tin. This game is renowned for being one of the very best online slots that utilises the cluster pay mechanic, despite retaining a classic 6 reel aesthetic.

All in all this slot is incredibly well polished and looks and sounds fantastic. Not only does it feel great to play, but it also boasts a number of exciting features that constantly had us on the edge of our seats.

Aloha! Cluster Pays has sticky win re-spins, free spin rounds and substitution symbols which come in the form of a crate bearing a question mark. These symbols can appear anywhere on the reels and transforms in the adjacent symbol that creates the highest possible winning combination.

Play Aloha! Cluster Pays at these no wagering casinos:- 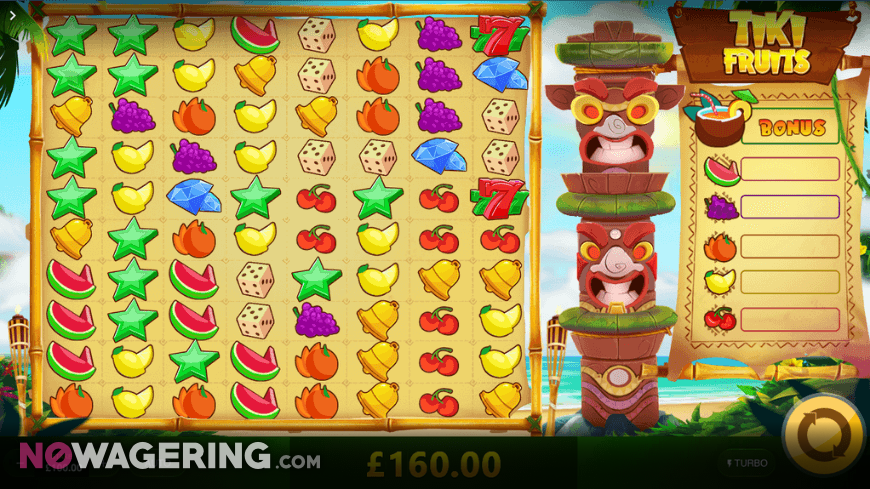 Played on an 8x10 grid rather than standard reels this unique slot sees symbols removed from the game when a winning combination of 5 or more symbols appear together. A cascading symbol feature means that one single win could potentially turn into several as new symbols drop into the game as old ones are removed.

Bonus features in this popular slot include the Totem Tower Activator that sees low paying symbols removed from the game randomly, dropping in higher paying ones in their place. Landing 5 Coconut Cocktail Bonus Symbols during normal play activates the Fruity Bars Free Spins which awards a random number of free spins and can prove to be very lucrative thanks to both the cluster pay and cascading symbol mechanics.

Play Tiki Fruits at these no wagering casinos:- 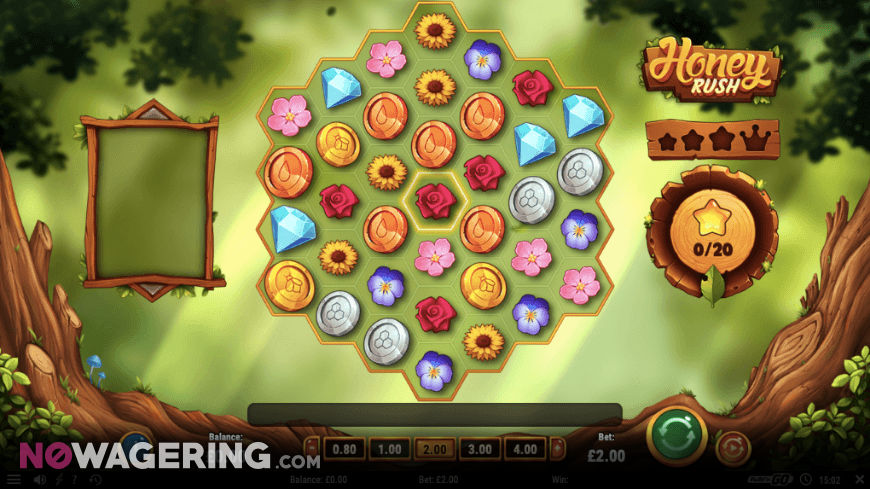 One of the more unusual titles on this list, Play'N GO slot Honey Rush is set in a honeycomb shaped grid that sees bee inspired symbols fall from the sky and into a hexagonal grid. If you want to get technical this highly volatile slot is played on a 4-5-6-7-6-5-4 reel formation, which is certainly something different from the norm.

Players that give Honey Rush a go will have to get to grips with the Rush Meter feature, whenever winning combinations are made the meter is charged. Once a level has been charged a bonus is activated. These features include the Worker Colony feature which randomly triggers a winning cluster, sticky wilds and of course cascading symbols.

Play Honey Rush at these no wagering casinos:- 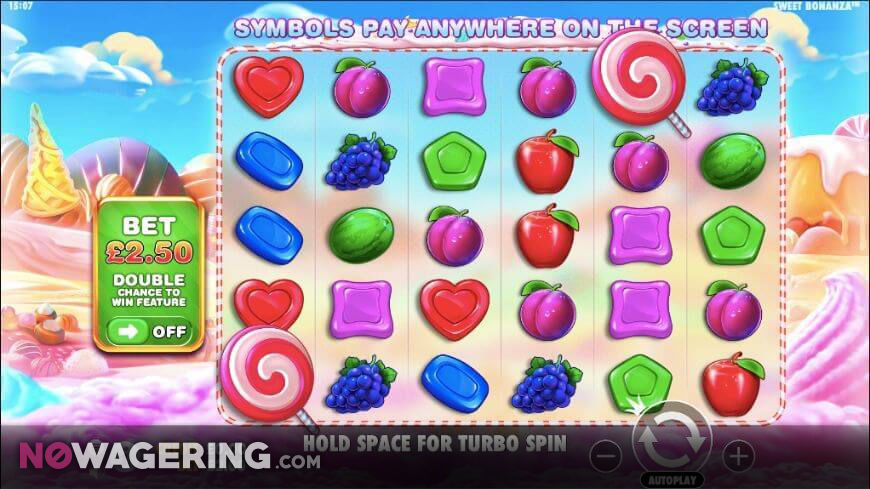 If Honey Rush wasn't sweet enough for you why not try Sweet Bonanza? The opportunity to win 21,100 x your initial stake should be more than enough to convince you to give this a spin! All in all this game is pretty straight forward, and unlike a lot of online slots with cluster pay mechanics it really isn't too difficult to grasp!

Aside from the big wins, it's the Tumble Feature is what makes this game so inviting, every time a winning combination lands it then kicks off a chain reaction in which winning symbols are replaced by brand new ones. Land 4, 5 or 6 lollipop symbols during any single spin and you'll launch the hugely lucrative free spins round that makes this game so popular with players! 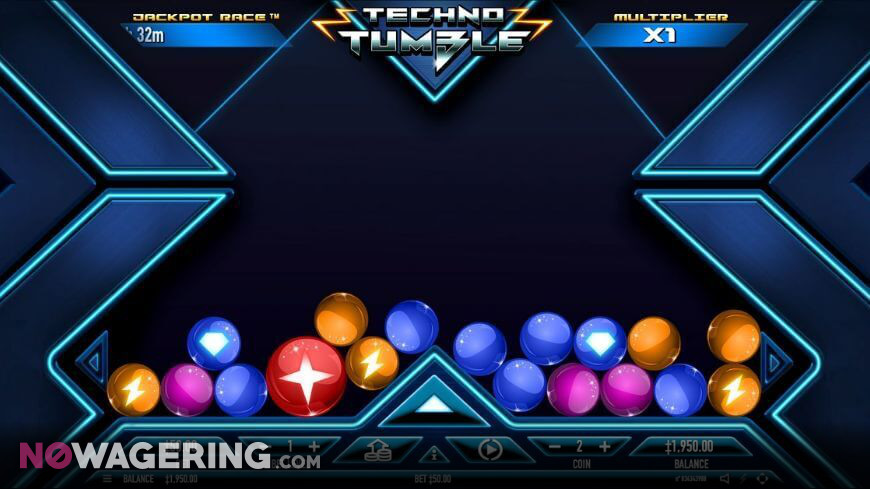 This fantastic futuristic slot from developers Habanero is truly unique and stands out due to the fact it has absolutely no reels. Yes, you heard that right, this game has no reels whatsoever! Instead Techno Tumble has up to 45 coloured balls that drop from the abyss and bounce into place at the bottom of the screen each time you press the play button.

Not only does this somewhat bizarre slot utilise an exciting cluster pay mechanic, but it also boasts wilds and scatter symbols that could lead to a lucrative free spins round that gives players 8 free spins. What's more, the 8 free spins could potentially grow into 24 spins in total with a bit of luck. If that wasn't enough Habanero have implemented the Jackpot Race into this game meaning there are often big cash prizes to be won whilst playing this.