Esqueleto Explosivo 2 is one of the most impressive Mexican-themed slots going! This 5-reel, 99 payline sequel to Esqueleto Explosivo boasts some truly impressive bonus features and mechanics including dropping symbols, increasing win multipliers (up to 64x the player's stake) and a very generous number of free spins! You'd be a fool not to try this cheerful Day of the Dead inspired title.

“ A huge improvement on the original and one of the best Mexican themed slots out there! ”

Get free spins on Esqueleto Explosivo 2 with no wagering requirements and keep what you win!

Every single time players register a winning spin the symbols explode and drop off the screen (this is essentially the same as a cascade), this allows new symbols to fall into place, potentially causing a chain reaction.

Every time these cascades happen the Mucho Multiplier kicks in, this is an increasing multiplier that climbs up in the following increments: x1, x2, x4, x8, x16, and x32. Payouts are boosted at the end of the cascade by whatever the multiplier is on at that time.

The Mucho Multiplier can also climb up one place whenever the Explosivo Wild symbol lands on reels 2, 3 and 4.

During this bonus every third Explosivo Wild that lands will give the players an additional free spin as well as removing the lowest multiplier from the Mucho Multiplier. A 64x multiplier is also added to the meter. 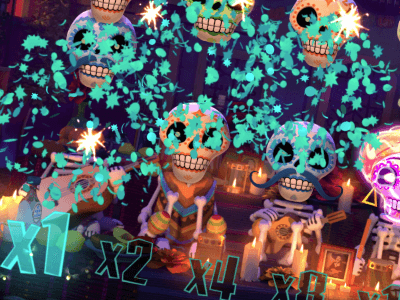 Every single time players register a winning spin the symbols explode and drop off the screen, this allows new symbols to fall into place, potentially causing a chain reaction. Each chain reaction sees an increasing multiplier climb up to a maximum of 32x during base gameplay. 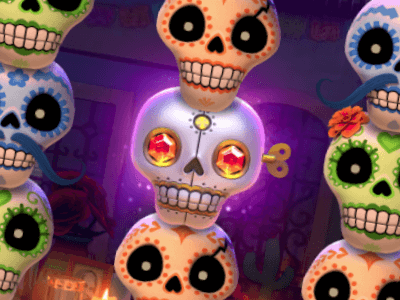 Esqueleto Explosivo is a charming 5-reel, 99 payline slot developed by Thunderkick that celebrates Mexican culture and the iconic Day of the Dead! With cascading symbols, a generous number of free spins and an increasing win multiplier all to be enjoyed there's no reason why you shouldn't give this bright, vibrant, wonderfully designed slot a spin!

We genuinely mean it when we say that this game is just perfect in almost every aspect when it comes to design! Rather than feature well-defined reels, game symbols float above the bodies of five Mariachi skeletons instead, who are each holding an instrument.

Game symbols are all Calaveras (sugar skulls), these elaborately painted skulls are different colours with the lowest paying one being aqua. The symbols that follow are orange, blue and green, each increasing in value. The two highest paying symbols include a pink skull with a rose in between its teeth and a glamorous female skull in make-up and jewellery. The game's Explosivo Wild symbol is a golden skull wearing a pair of sunglasses and the scatter is a clockwork skull.

So many small details have gone into making this slot look absolutely fantastic! Behind the reels is a darkened Mexican street covered in flowers, lit candles and framed photographs of the dearly departed, on occasion the street is illuminated by fireworks!

In terms of its soundtrack, Esqueleto Explosvio 2 offers exactly what you'd expect, cheerful, upbeat Mariachi music! On top of that, the floating Calaveras will sing a sweet tune every time a winning payline is formed, the more winning paylines are formed, the longer the song! Once the song has finished the skulls explode and confetti flies everywhere!

Everything players really need to be acquainted with in Esqueleto Explosivo 2 can be found along the bottom of the game screen. On the left-hand side of the action bar there's a pop-out menu that details the game rules and paytable. On the right-hand side of the game's action bar there's a stake selection button, an autoplay button (that allows players to set up to 5000 automated spins) and finally, there's a play button!

Above the game's action bar there are six floating 'Mucho Multipliers' that increase in size after every successful cascade, during the free spins bonus round an additional 64x Mucho Multiplier is added!

This high volatility slot has a decent RTP of 96.13% and can see players win a maximum of 5,000x their stake, which isn't too bad at all as long as you have the bankroll and patience to maintain high volatility gameplay.

This cheerful Day of the Dead themed slot Esqueleto Explosivo 2 is a huge improvement on the original game and genuinely has so much going on that we were beaming from ear to ear with every single spin of the reels. We'd almost say this is one of, if not the very best Mexican-themed slot going! If you've got the time give it a spin!