Sometimes we want just to take the easy route in life, there's no denying it... And we really can't blame you for that way! If you haven't come across Big Time Gaming's Feature Buy before then it might just change the way you play online slots forever.

Put simply, the Feature Buy is a shortcut that transports players straight to the lucrative bonus round, meaning that the chance to win big is instantly boosted with a single click of a button. It should be noted though, that the Feature Buy mechanic does come at a hefty cost which is usually somewhere between 25x and 200x your initial stake.

More often than not the Feature Buy will unlock a basic free spins round that would normally require players to land several scatter symbols in normal play, however the Feature Buy mechanic bypasses this completely. In many games there are varying levels of Feature Buys, which means players can pay more in order to unlock longer free spin rounds.

If you're wondering why you've seen the Feature Buy mechanic in slots that aren't developed by Big Time Gaming, that's because the company license out the feature to other studios such as Blueprint Gaming and Yggdrasil, very much in the same way they license the Megaways concept.

Ultimately the Feature Buy is a controversial feature, you'll either love it or you'll hate it. With online slots you never truly know what will happen on any given spin, on one hand you could trigger a free spin round within your first 25 spins, however on the other hand you could spin the reels over 150 times and not get anywhere close to triggering a bonus round, at this point it might well be worth paying that bit extra in order to go for a cash boost.

Before you jump into a game in the hopes of utilising the Feature Buy mechanic, you should be aware that players in the United Kingdom cannot utilise this anymore this as the UK Gambling Commission banned this mechanic towards the end of 2019. So if you're playing at any casino licensed by them you'll find that this feature has been disabled.

The feature was banned as the Gambling Commission felt that it made it far too easy for vulnerable players to spend thousands of pounds in quick succession.

The best slots that have a Feature Buy mechanic

There are a number of online slots out there that have Feature Buy built into them, some well worth playing, some not so much! We here at No Wagering have put together a list of those slots we believe are well worth a spin. If you've got the bankroll and you want to take a shot at the bonus round straight away then we'd highly recommend giving these games a go! We've even included a number of no wagering casinos below each title where you'll find each slot. 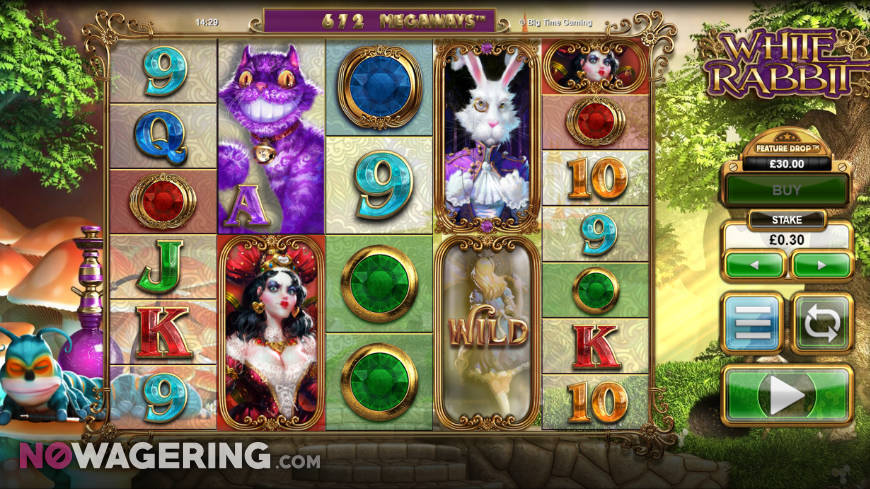 Inspired by Lewis Carroll's classic fairytale Alice in Wonderland, White Rabbits Megaways not only offers players up to 248,832 ways to win through bonuses with Big Time Gaming's Megaways mechanic, but it also plays host to the world's first Feature Buy mechanic called Feature Drop! Unlocking this costs players 100x their normal stake, so if you're playing at 0.20 per spin you'll be expected to pay €20 to unlock a free spin round.

However, that's not all there is to this innovative mechanic... Players can collet Feature Drop Symbols during normal gameplay, this sees the price of launching the feature lower by 0.2x to 2x every single time one is collected. With this feature players can take their chances at a bonus round for a lot less money than they initially anticipated.

Many players consider White Rabbit Megaways to be one of the most flawless online slot games ever released. It looks and sound fantastic and is jam-packed with innovative bonus features such as Extending Reels and has mechanics unlike any other at the time of release. White Rabbits really set the bar as far as slots with Feature Buy mechanics go. 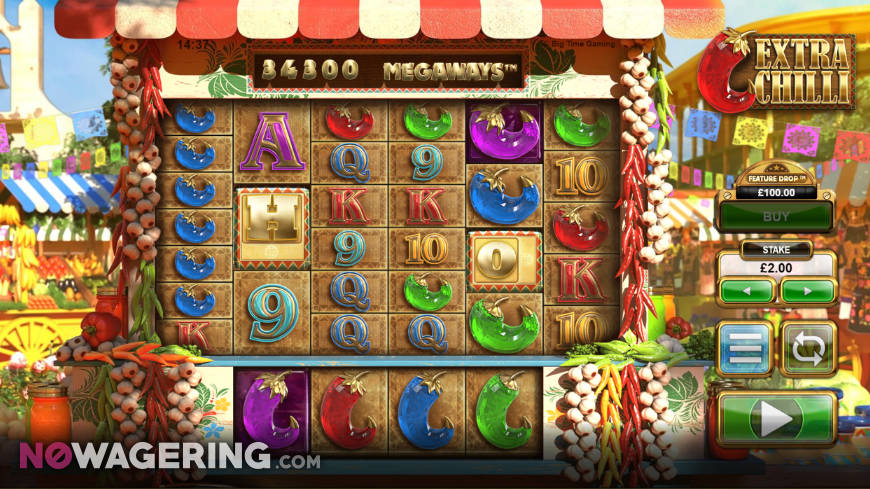 It's hardly surprising that another online slot from Big Time Gaming has made the list considering that they're the pioneers of the Feature Buy mechanic.

Strangely, this slot is a follow up to long-time favourite Bonanza, which does raise a few eyebrows considering the first game is mining themed. However, we understand Miner pivotal to the first slot gave up life in the mine to open his own Chilli stall.

Like White Rabbits, this game also has the Megaways mechanic built in, offering a massive 117,649 ways to win. This game is filled with features including a Gamble Round, Dual Reactions (Which sees new symbols drop in follow a win, leading to bigger payouts), multipliers and free spins.

This feature has a standard Feature Drop mechanic similar to that of the one in White Rabbits (Excluding the Feature Drop Symbols) with varying prices depending on what stake you're playing at. 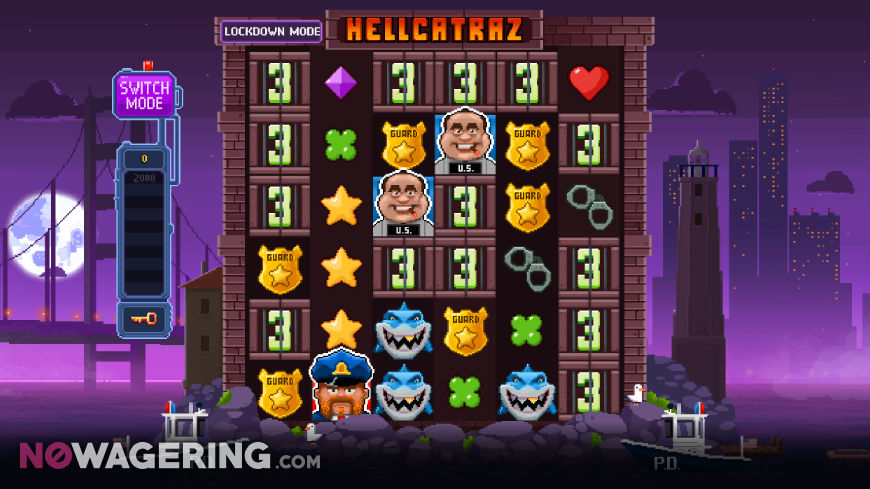 Hellcatraz is a truly unforgettable 8-bit masterpiece from Relax Gaming that's brand new for 2020. This unique slot is themed around the infamous Alcatraz Prison and is filled with symbols and imagery relating to the criminals and prison guards.

Designed to look like a retro video game, Hellcatraz is boasts a number of innovative features, including the ability to set your game mode to a volatility that suits your style of play and bankroll, mystery symbols, Super Free Spins, a Key Collector Meter and of course the Buy Feature.

The all important Buy Feature allows players who haven't collected 2,000 keys during normal play the opportunity to launch the Super Free Spins round straight away.

This will cost players 200x their initial stake which whilst expensive, is well worth it if the bonus round pays out. The cost of the bonus round can be reduced, but only if players trade in the keys they've already collected through normal play. 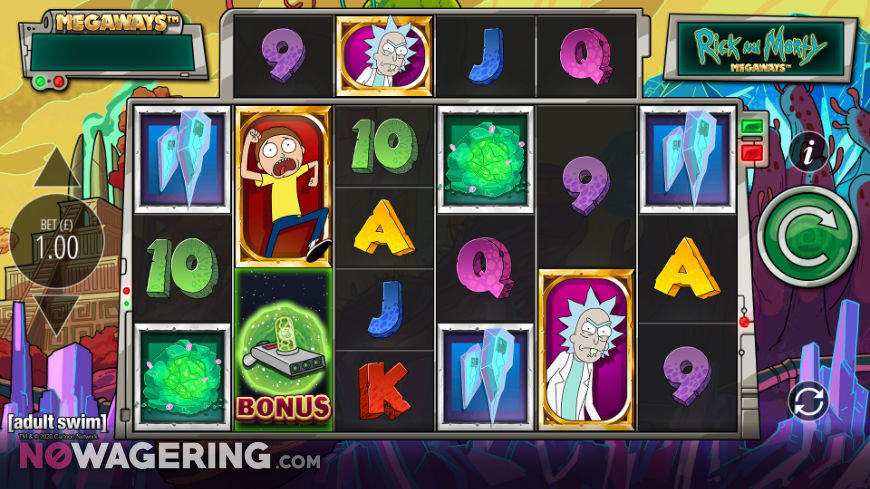 We're no strangers to Rick and Morty Megaways, a game we reviewed earlier this year. The iconic duo made their slot debut at the start of the 2020 after Blueprint Gaming took an ambitious punt at developing a branded title based on the hit tv-show.

Players can obviously expect an insane amount of win lines considering it's part of the ever-expanding catalogue of Megaways titles, however, aside from that this game boats mystery symbols, cascading symbols and a whole host of unique free spin rounds including Pickle Rick Free Spins, Federation Wild Free Spins, Vindicators Free Spins and Mystery Free Spins.

If players want to make the most of Ricky and Morty Megaways Bonus Buy feature then they'll have to to pay 150x their initial stake to launch a Mystery Free Spins Wheel. Here they'll be win either 5, 10, 15 or 20 free spins.