If you’re passionate about music and enjoy hitting the slots at your favourite no wagering casinos then we’ve compiled a list that’s going to have you dancing to our beat in no time at all... Pump up the volume and get ready for No Wagering's top 5 music themed slot games.

We absolutely could not compile this list without including the King of Pop himself, Michael Jackson. This 5-reel, 25 win line slot from Bally Technologies is pretty impressive and had us tapping along to five of Michael Jackson's most iconic songs Billie Jean, Bad, Smooth Criminal, Dirty Diana and Beat It.

Accessible to both high and low rollers with stakes ranging from 40p to £80 this game won is over early on.

There are features-a-plenty here including: Moonwalk Wilds, which double the value of any win you receive, stacked wilds and the elusive Platinum Bonus Spin, which lets you spin a wheel that could potentially land you cash prizes or trigger one of two bonus games, Bad or Smooth Criminal. Triggering these will launch a short clip from Michael's music videos followed by plenty of free spins!

If you're a fan of the late-great Michael Jackson then you'll find yourself truly immersed in this classic themed slot game. 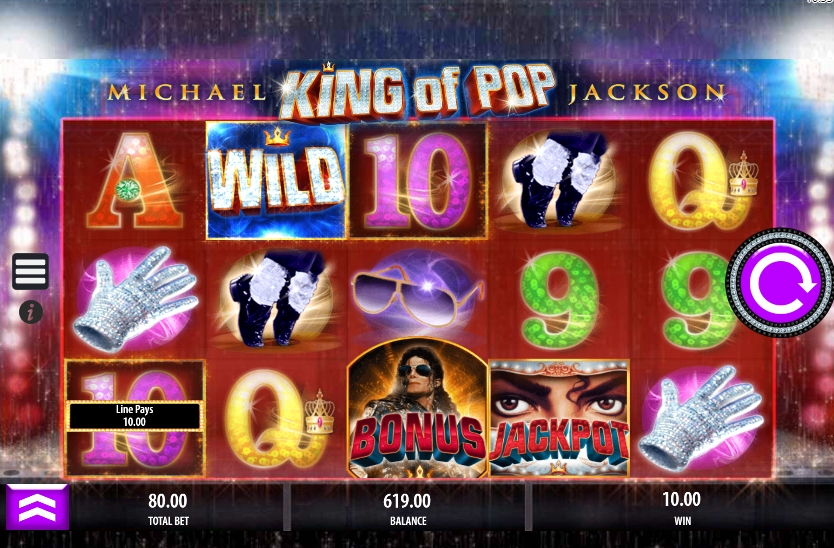 Let's be honest, we all have guilty pleasures... Who doesn't love Grease? This classic Hollywood hit musical has been re-imagined beautifully by PlayTech. The 5-reel, 20 win line slot set in the iconic Frosty Palace Diner transports you right back to the 1950s, packed with songs from the film, we don't think you'll be at all disappointed with this feel-good game.

Our favourite feature of this slot is undoubtedly unlocking the bonus where you'll get a choice of playing one of three games: Better Shape Up, which gives you 12 free spins filled with high value symbols, Rydell High Yearbook Bonus, which sees you win up 100x your bet if you correctly pick yearbook photos in a mini-game and Summer Nights, which rewards you with up to 8 extra wild symbols on four free spins.

Another cool feature packed away in this charming game is the Greased Lightning Jackpot feature, this is accessed completely randomly and will see you potentially win one of two progressive jackpots.

If you're fan of this film and of course, the music, then we think you'll really enjoy playing this magical slot! 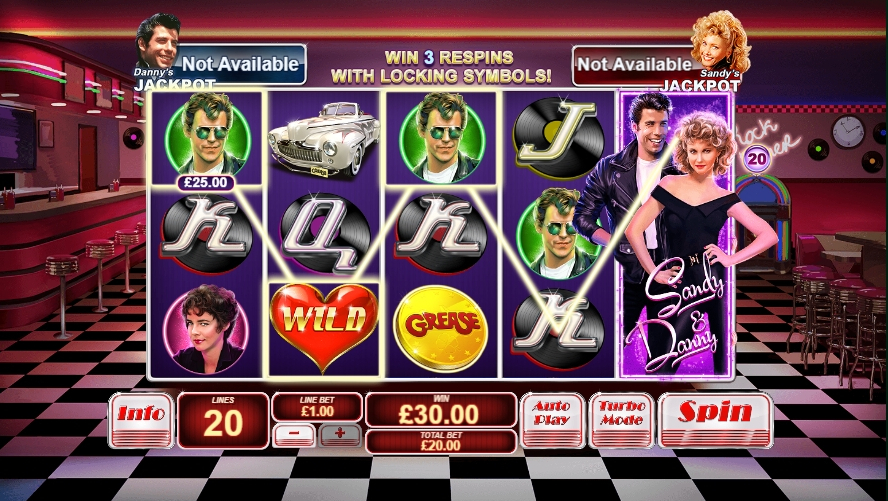 Whilst this WMS game based on the fire-breathing American hard-rock band Kiss may look daunting at first, it's certainly not a waste of your time and will win you over straight away! This slot has a mammoth 10-reels and 100 win lines meaning the possibility of landing a winning spin are even higher than ever, that's not hard to get behind right?

The game features three classic tracks from Kiss including: Rock and Roll All Nite, Detroit Rock City and Shout It Out Loud... If you're lucky enough you'll also get the opportunity to witness footage from a Kiss concert, something we're sure all Kiss fans will thoroughly enjoy!

In terms of features, if you manage to get the Kiss Shout it out loud Scatter Symbol then you'll have the opportunity to choose one of three further bonuses: The Band Prize, The Rock n Records free spins bonus or the KISS! Alive pick'em bonus. With free spins, scatters, nudges and multipliers all waiting to be triggered there really are so many ways you can hit the jackpot in this enthralling slot. 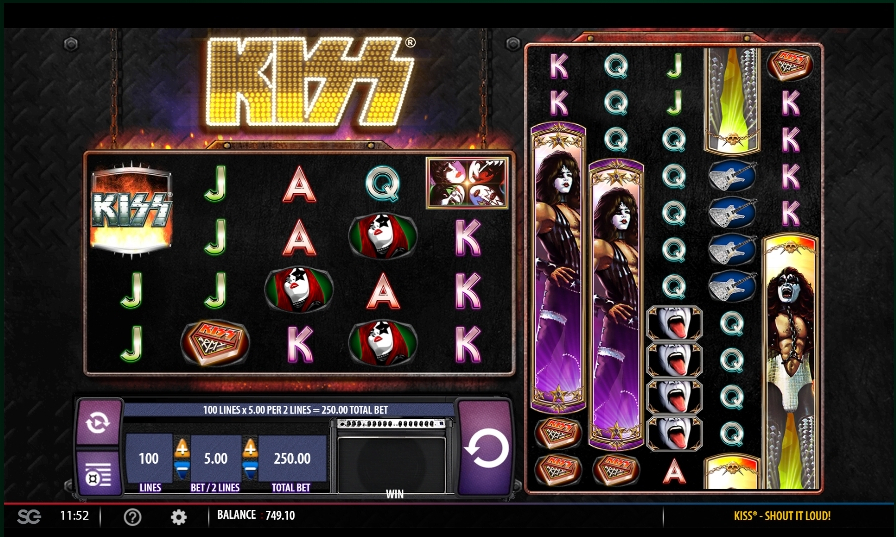 Greeted with a face melting riff from Sweet Child O' Mine and an impressive cinematic intro video, you know from the get-go that playing this slot is going to be a wild ride...

We expect nothing less when one of the world's biggest rock bands teams up with one of the world's best slot game developers. This 5-reel, 20 win line slot from NetEnt has a LOT to offer, starting with the overall design and sound of the game, a set list in the corner of the screen allows you to chose from four of Guns N' Roses greatest hits including Welcome to the Jungle, Sweet Child O' Mine, Paradise City, November Rain and Chinese Democracy. The reels are placed in front of a giant stage surrounded by a hoard of screaming fans, whenever a win lands the crowd go wild and sparks fly across the screen.

Guns N' Roses Video Slots is stacked with features and bonus games including your traditional and expanding wild symbols, the appetite for destruction wilds (Which show in the shape of a cross), legend spins, encore free spins a bonus wheel and the enthralling crowd-pleaser bonus game that showers the player in rewards if triggered.

In terms of features, design, sound and overall fun factor we rate this slot highly, if you come across it... Please do give it a spin! 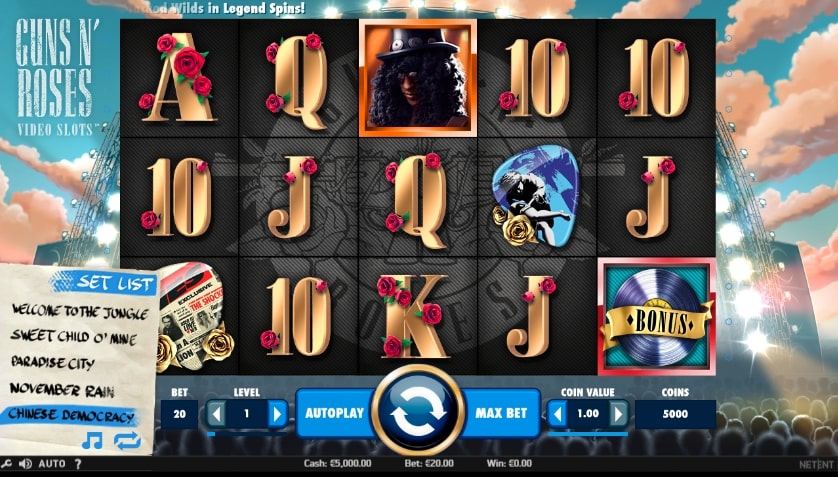 We've said it before and we'll say it again, NetEnt absolutely smash it out of the park with their licensed slots and this slot game is definitely one of their best. The simple yet truly groovy design coupled with the awesome Hendrix guitar solos playing in the background will have fans have drooling at the prospect of spinning this fantastic 5-reel, 20 win line slot game.

You might also trigger the encore mini-game which is a pick and click feature played when 3 scatter feature symbols appear on reels 3, 4 and 5.

If you're all about flower-power and want to take a step back in time to Jimi's heyday at Woodstock Festival in the 1960s then this is without a shadow of a doubt the slot for you. 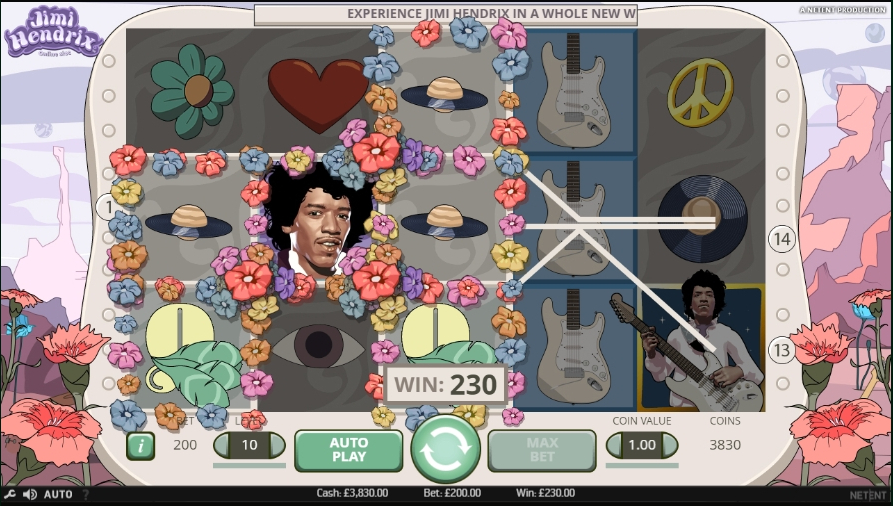