Popular Wazdan slot Larry the Leprechaun has been given the highest accolade at the Malta Gaming Awards being named Slot Game of the Year.

The prestigious award, decided upon by a panel of 16 leading figures in the iGaming world looked at a selection of the best online slot games that were released in 2019.

What makes Larry the Leprechaun an award winning slot? 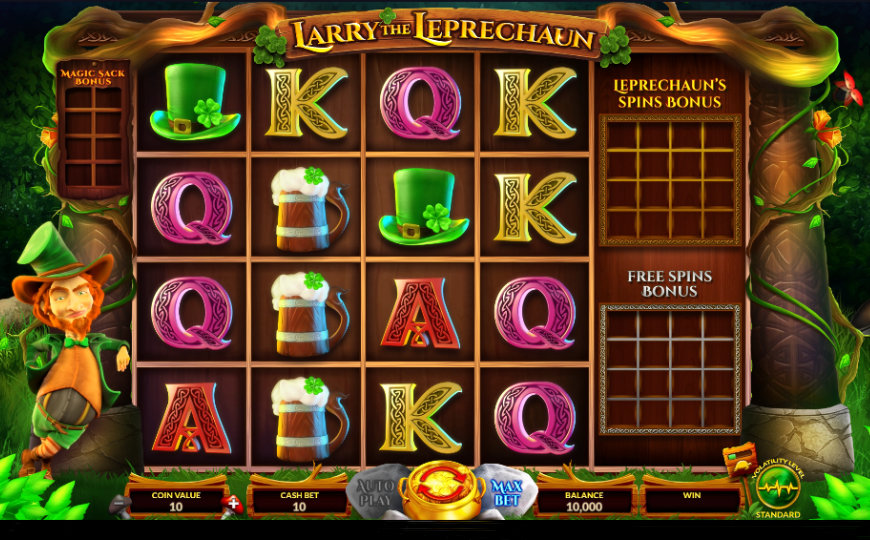 This charming and somewhat unconventional Irish-themed slot game utilises 4 reels and 4 rows. The most notable thing about this unique slot is the fact that there are no winning combinations, whatsoever! Players win by landing 8 identical symbols on the reel at once.

Of course, as you would expect any award winning slot has to be filled to the brim with unique features, Larry the Leprechaun certainly delivers, here's what you'll find packed into this game:

After every spin you make you'll have the opportunity to lock as many symbols in place as you like ahead of the next spin. If you hit 6 identical symbols in any normal spin then the game will automatically lock them for you, however if you don't wish to lock them to the reels you're able to unlock them and continue playing. If you land 8 matching symbols on your first spin you can lock them and guarantee a win in the following spin.

The Free Spins bonus round occurs when you've collected 16 silver coins followed by an additional five once the meter is full. This mini-game gives you a total of 16 standard free spins. There are no special features such as silver or gold coins, locked symbols or magic sacks, however wilds do occur and will be locked to the reels.

Collect 16 golden coins as you spin the reels followed by an additional five once the meter is full and you're able to launch the Leprechaun's Spins bonus mini-game. This mini-game gives you a total of 16 free spins with sticky wilds, every spin that yields a Larry the Leprechaun wild symbol will see it locked to the reels, at the end of the bonus round players will enjoy a lucrative payout based on many wilds fill the reels.

Every time you a magic sack lands on the reels you'll lose some of the gold and silver coins you've been collecting, however the bag will be added to a meter which when filled with 8 eight sacks will launch 8 free spins. During every spin of the magic sack bonus round 5 random symbols will be turned into wilds, every additional sack symbol will also become a wild.

"We knew this game was special"

Andrzej Hyla, Head of sales of Wazdan has this upon winning the prestigious award: "Throughout the creation of Larry the Leprechaun, we knew that this slot game was special.

"Our team poured their hearts into creating a high stakes slot with an engaging narrative and all the Wazdan features our players and operators expect.

"To be awarded Slot Game of the Year by the MGA Awards means a lot to our team and our partners.

"We are humbled and thrilled, and want to thank everyone responsible for bringing Larry the Leprechaun to life, as well as to our players and partners for supporting the game,"