If you like Irish-themed slots crammed full of thrilling bonus features and innovative mechanics then this bright and cheery 5-reel, 20 payline NetEnt slot will be right up your street! This game boasts multipliers, jackpot wheels, free spins AND a unique pot luck feature. We highly recommend that you give this medium volatility slot a spin.

Irish Pot Luck is actually filled to the brim with innovative and lucrative bonus features and mechanics, which hardly comes as any surprise as this is a NetEnt slot, and we all know NetEnt slots go above and beyond when creating headline slots such as this one.

First and foremost we have the random multipliers, a sign-post to the right of the reels spins every single time the reels are spun during base gameplay, it will stop on a random multiplier that could be 1x, 2x, 3x or 5x and will see whatever wins are triggered multiplied by the said amount. During the free spins bonus round these multipliers climb to 2x, 4x, 7x or 15x.

Next up we have the Pot Luck feature, this is where the Leprechaun to the left of the reels will randomly throw up to 3 Jackpot or Scatter symbols anywhere on reels 1, 3 and 5 at any time. There's also a chance he'll throw up to 5 wilds randomly on any reel.

If by chance scatter symbols land (on reels 1, 3 and 5) then players will receive up to 10 free spins with the aforementioned multipliers, these free spins can re-triggered the same way during the bonus to award players with an additional 10 free spins.

Finally, we have the Jackpot Wheel feature, this is a wheel-of-fortune that will be spun upon players landing jackpot symbols on reels 1, 3 and 5 during the base game or free spins feature.

A three-tiered wheel-of-fortune is spun which will determine whether players win a multiplier between 2.5x and 10x their initial stake or one of the three fixed jackpots, the Mini, Midi and Mega Jackpots. 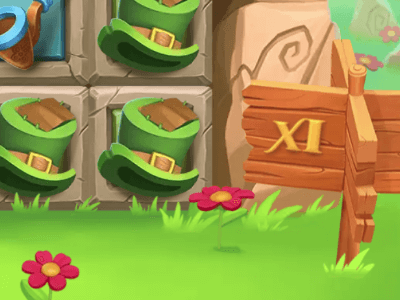 On each and every base game spin a sign-post to the right of the reels spins, awarding players with a multiplier between 1x and 5x. During the free spins bonus, this sign-post can award between 2x and 15x on every win. 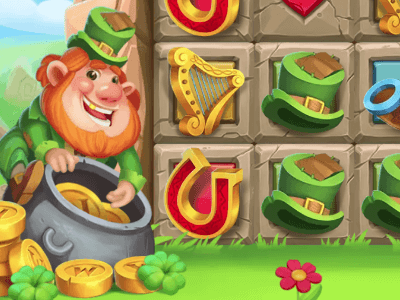 A Leprechaun sits to the left of the reels and will randomly throw up to 3 Jackpot or Scatter symbols anywhere on reels 1, 3 and 5 at any time. There's also a chance he'll throw up to 5 wilds randomly on any reel. 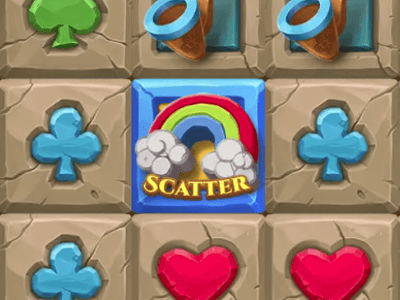 Players can automatically trigger 10 free spins (with 2x, 4x, 7x or 15x multipliers) whenever scatter symbols land on reels 1, 3 and 5. An additional 10 free spins can be triggered during this bonus feature. 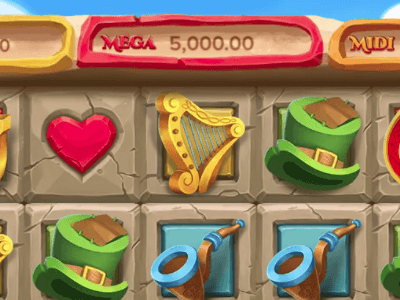 If players land jackpot symbols on reels 1, 3 and 5 during the base game or free spins feature. A three-tiered wheel-of-fortune is spun which will determine whether players win a multiplier between 2.5x and 10x or one of three fixed jackpots.

This wonderfully-designed slot has real Gonzo's Quest vibes, with a cheerful ginger Leprechaun sat to the left of the reels, throwing in wild, scatter and jackpot symbols whenever he feels like it!

What's not to love about Irish Pot Luck? The game reels are set upon what looks to be an old ruin surrounded by Irish stone circles covered in ancient runes! Butterflies often fly by, interact with the landscape and even land upon the nose of the gleaming animated Leprechaun situated to the left of the reels. Speaking of which, keep an eye out for whenever the Leprechaun reaches into his pot of gold, as he often likes to reward lucky players with wild, scatter and jackpot symbols.

In terms of sound, yes, this game is exactly what you'd expect from an Irish-themed slot! Cheerful, upbeat flute music plays throughout... And we love it!

This game features a couple of unique mechanics that make it stand out from other stereotypical 5-reel Irish-themed slots... Firstly we have a sign-post to the right of the reels spins EVERY time the reels do, upon the conclusion of a spin, the sign-post will stop as well, displaying a random multiplier which is then awarded on top of whatever is won, which is pretty decent!

The second mechanic this slot features is the Leprechaun throwing random bonus symbols onto the reels every few spins! It's not new to see regular wilds, scatters and jackpot symbols land on the reels regularly, but the way it's been visualised in this slot is something special, and we love it!

In terms of general gameplay, this slot plays like most standard NetEnt slots, the action bar runs across the bottom of the game reels and is transparent so that nothing is taken away from the game's fantastic design. From left to right there's a hamburger menu with game settings, an information button that displays the paytable, this is followed by stake selection, autoplay, play and turbo buttons.

On the top of the reels are three fixed local jackpots totals, the Mini Jackpot, Midi Jackpot and Mega Jackpot.

Not only does this medium volatility slot offer players multipliers worth up to 15x on each and every base game spin (which is fantastic), but it can see players win a total of 5,000x their stake upon triggering the game's Mega Jackpot. If that wasn't enough, the RTP is also decent as well at 96.06%.

It's hardly surprising that we enjoyed playing Irish Pot Luck, it might be your stereotypical Irish-themed slot, but that's not to say it isn't one of the better ones! NetEnt have filled this game with some brilliant bonus features and mechanics and it had us hooked from the very first spin.