If like us, you're nuts about online slots then you'll know that there's no shortage of incredible games themed around the legendary world of Ancient Egypt.

You know exactly what to expect from these bountiful slots, awe-inspiring golden pyramids, tombs filled to the brim with priceless treasure and of course memorable characters such as intimidating Pharaohs and fearless explorers after their riches.

If riches are what you're after then we think you'll find our list of the best Egyptian themed slots tied to wager-free bonuses on point, and exactly what you're looking for! You have to take our word for it when we say that there's plenty of treasure to be won if you opt for one of these fantastic games.

To make life even easier for you all we've included links to our favourite no wagering casinos alongside each slot we've showcased. Here you'll find plenty of wager-free spins to benefit from as well a casino cashback offers where applicable. 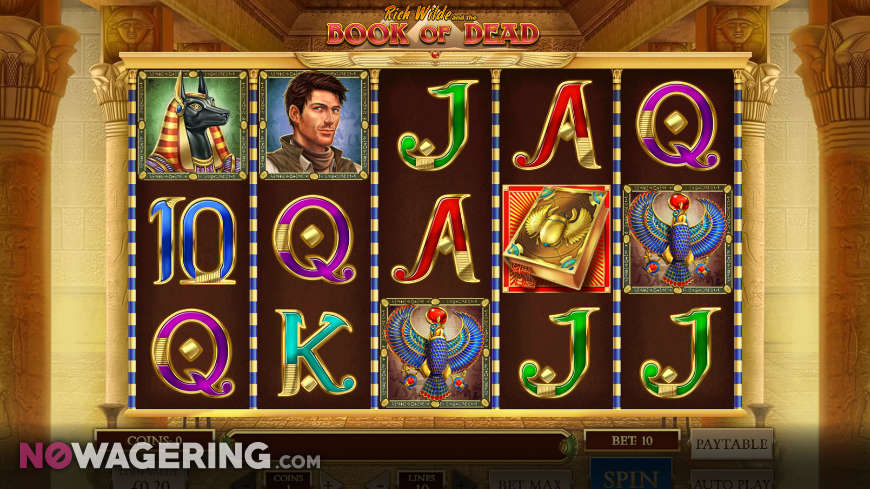 Rich Wilde and the Book of Dead almost needs no introduction, if joining an adventurer on the hunt for treasure sounds good to you, then this 5-reel, 10 win line instalment of the famous Rich Wilde series from Play'n GO is perfect for you.

There's no denying that many Egyptian themed online slots are quite old... Play'n GO decided to take advantage of this, taking inspiration from a number of classic Egyptian slots of yesteryear when developing Book of Dead, putting everything good about them into this game, really helping propel this slot into the mainstream, and the genre into the 21st century.

There aren't a groundbreaking number of features to be found in this game, however, the ones that are there are absolutely flawless... First and foremost, players can attempt to double or quadruple their money by playing a simple card game after each and every spin with the gamble feature.

The other feature players should be looking to get the most out of is the free spins bonus. Players can benefit from a minimum of 10 free spins with expanding symbols, and with a bit of luck can unlock a further set of free spins if more scatters land. 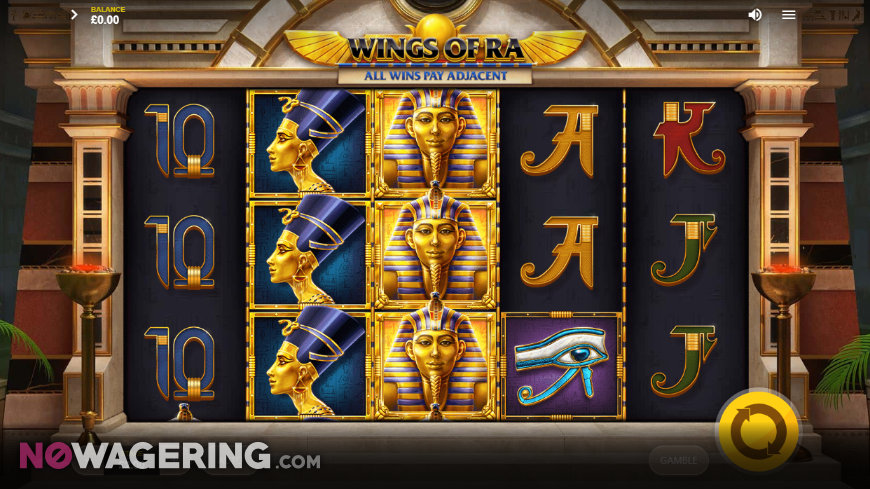 Wings of Ra is renowned developer Red Tiger Gaming's modern take on an Ancient Egypt-themed online slot game, and we LOVE it! This game has all the hallmarks of an Egyptian themed slot, and as is to be expected of a Red Tiger game title, it's just gorgeous and truly looks and feels like a slot released in 2020 should.

This 5-reel, 10 win line slot utilises a Mystery Coin symbol in the place of a standard wild symbol, whenever one (or more) Mystery Coins lands on the reels it will spin, cycling through various symbols before stopping and revealing identical random symbols, hopefully leading to a win. These Mystery Coins also show up in the free spins bonus round that's triggered when players land 3 or more scatters anywhere on the reels.

During the bonus round players receive either 12, 15 or 18 free spins, and whenever a Mystery Coin lands on the reels during these they help towards filling up a progress bar. Once this bar is full (after 14 mystery symbols have appeared) the lowest paying symbol will turn into a mystery symbol, increasing the frequency of high paying symbols on the reels. 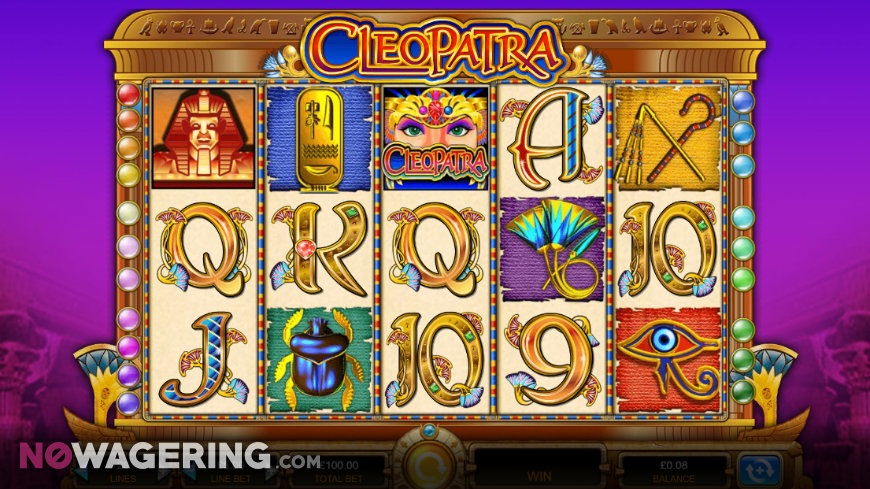 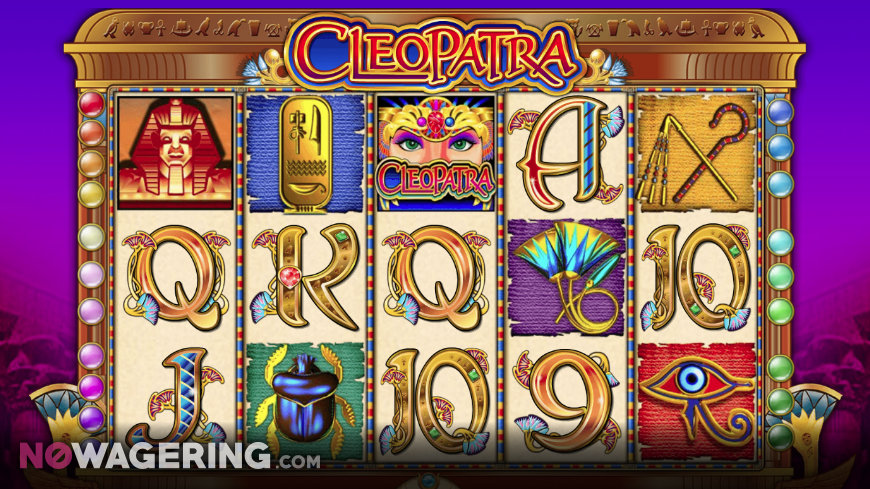 Born in Las Vegas and adapted for the world of online slots Cleopatra is old, but gold! This legendary 5-reel, 20 win line Egyptian themed slot from IGT is considered one of the greatest and most influential titles to have ever existed.

In terms of design, you really cannot get more Egyptian than this... Gold surrounds these recognisable reels whilst classic imagery such as scarabs, the Eye of Horus and a Sphinx appear as symbols.

At first glance, it seems as if there really isn't really too much to shout about in terms of bonus features in Cleopatra... But that's where you're incredibly wrong!

This epic slot has a free spins bonus round that offers players a total of 180 (yes, you read that currently, one hundred and eighty) free spins! And if that wasn't enough, ALL wins registered during the bonus round are tripled. 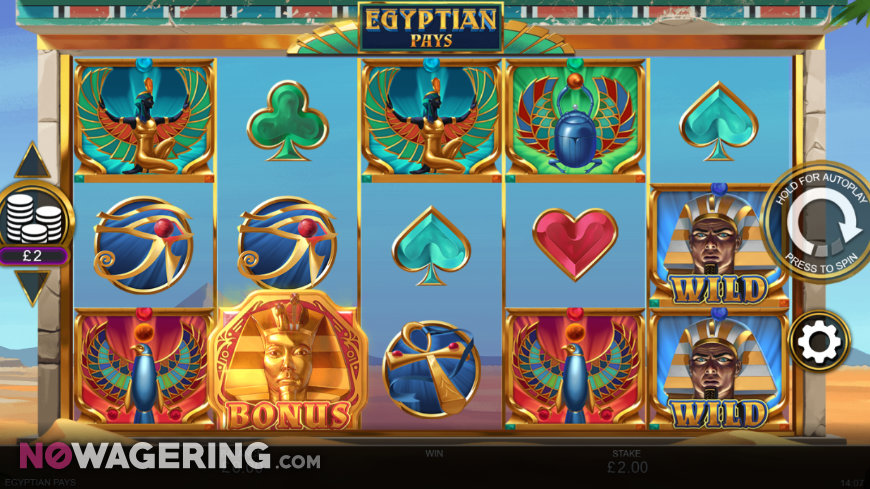 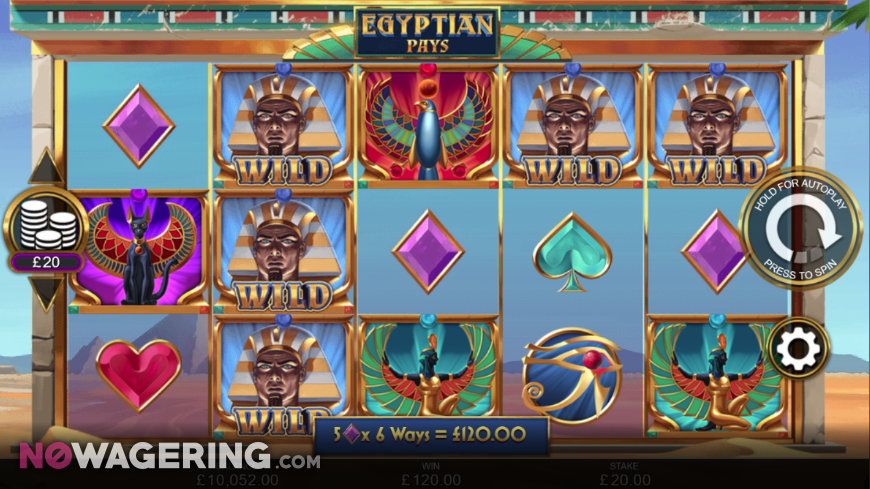 Inspired Gaming's 2020 release of Egyptian Pays transports players to familiar territory, the heart of the Egyptian desert where the pyramids of Giza stands proudly behind the game reels.

This highly volatile 5-reel, 243 win line slot is filled to the brim with exciting bonuses and mechanics that include increasing multipliers, respins, stacked symbols, stacked symbols and wild reels.

The biggest feature this slot boasts is no doubt the re-life spins bonus that sees players benefit from unlimited free spins with an increasing multiplier. 3 lives are awarded to the player when the bonus begins, every time there's a losing spin the player loses a life, every time they win they're completely reset and a win multiplier climbs up to a maximum of 50x.

This bonus round also includes Life Saver Spins, these kick in when you only have 1 life remaining, a single wild symbol will expand and cover the entirety of the third reel.

As a final lifeline, this game also offers a Spin Chance feature. This is triggered automatically if the player's credit is reduced below the cost of a spin (but still greater than zero). They can then play a final spin in an attempt to register a win.