Some of the games include classic slots, whilst others have more modern mechanics such as cluster pays and cascading reels. There is literally a Kingdoms Rise game for every sort of online slot player. 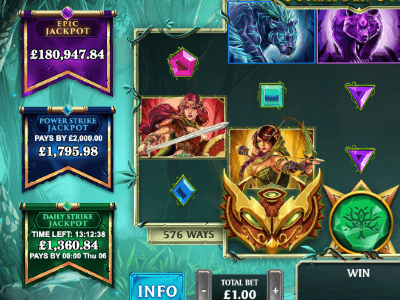 In this series you even have the chance to find 3 progressive jackpots such as the Epic Jackpot, Daily Strike Jackpot and Power Strike Jackpot.

You’ll find that each game in the series is linked by the unique Kingdoms Rise Shop that allows you to buy bonus features with currency earned in the game that carry over throughout the series. 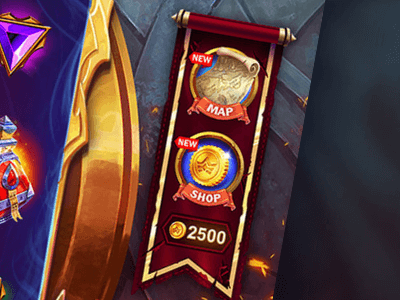 In every game, there is a map to guide you to the next location within the Kingdoms Rise world. You can jump from an ice wasteland to a town in the sky - the choice is up to you.

iGaming legends Playtech return with another mighty game series called Kingdoms Rise. In this series, you are transported to a mysterious world full of beauty and danger. Kingdoms across the world have fallen and it’s up to different heroes to stand victorious.

Begin your journey by sailing across the dangerous seas to try to reclaim the precious booty. You’ll find yourself teaming up with the mighty captain Red Jack, and it’s up to you to find the greatest treasures in the land. There are plenty of ways to win by either purchasing extra bonuses from the Kingdoms Rise Shop, or their in-game re-spins.

Step foot into this mystical forest filled with ethereal warriors called the Nayaal. Be careful as there are powerful warriors who defend the forest from any strangers. Try your luck at spinning to get past the Nayaal and towards the treasure with the help of the Owl Respin that can give you up to 12 re-spins.

The proud Elvenstone kingdom stands between the dark ocean and defies all elements. It’s a place embroiled in a battle between a supreme dragon named Gorog and the trading town. Can you fight to secure the treasure hidden by Gorog? With the help of wilds and the Kingdoms Rise Shop, you’ll have a fighting chance to take the treasure.

Kingdoms Rise: Guardians Of The Abyss

It’s time to head deep underwater to face your latest challenge and find sacred treasures of the deep. Here you’ll face an ancient civilization of noble warriors called the Leviathans. Unlock the secrets of the abyss with generous multipliers that could win you a tasty 7,500x your stake.

Enter the harsh and brutal wasteland in the cold north. You’ll encounter King Styrbjorn and his most prized possessions. It’s up to you to reclaim treasure and get the glory for conquering this land. With options such as re-spins and bonus from the Kingdoms Rise Shop, there’s no way you won’t miss out on procuring the Kingdoms Rise Jackpot.

From one wasteland to another, head to see the desert Queen Raz for your next adventure. In a place full of sandstorms, outcasts and dangerous animals - this place is definitely not for the faint of heart. Despite it being a barren land, it’s incredibly prosperous with valuables all around. With the help of fury wilds and tokens, you’ll be able to fight your way up to the Kingdoms Rise Jackpot.

You’ve been to the depths of Ocean and various landscapes, but how about a floating city? Once you reach the Empire of Celestria, you’ll notice dragons guarding various treasures. Humans are no longer your only problem. Help to defeat dragons with features such as free spins, spreading wilds, knight and empress free games.

Only the most skilled or wacky adventurers dare to head to the far west. Face scary giants who will hunt anyone who gets in their path. They have collected a huge amount of wealth and treasure, so you’ll have to be smart at getting the loot. You won’t be alone, as you’ll have the assistance of free spins and re-spins to help you get closer to the Kingdoms Rise Jackpot.

It’s time to face your biggest challenge yet! Find Talana, the Shadow Queen, and persuade this brutal Archon to give you her riches. Featuring Magic Wins and a Magic Wheel, there are so many features to assist you on your quest.

There is so much detail in this series that it shows what a revolutionary online slot game should be. It blends the best of magical video games with slots to make something truly unique.

So, can you battle through these different lands to procure the jackpot?