Hitman is a classic 5-reel, 15 payline slot developed by Microgaming in 2007 that's based around the notorious Agent 47, a renowned contract killer who has been immortalised in an entire series of Playstation and Xbox video games over the years. This popular slot might be old, but it features a whole host of fantastic bonus features and mechanics including expanding wilds, multipliers, free spins and pick and click mini-games.

“ This killer slot might look a bit dated, but it boasts some fantastic bonus features! ”

Play Hitman by Microgaming at these trusted online casinos. We've manually verified that Hitman is available to play at the following online casinos. These casinos have been audited and reviewed by us and are the best casinos to play Hitman for their design, usability, game selection, promotions, banking methods and customer support.

Hitman is actually pretty impressive when it comes to bonus features and mechanics, especially considering the age of this classic Microgaming slot, having been released during a time in which slots weren't exactly filled to the brim with too many innovative bonus features.

The main bonus mechanic that can be found during base gameplay are expanding wilds, these eye-catching animated expanding wilds can land on reels 2, 3 and 4 and will substitute for all symbols except for the two scatter bonus symbols.

When three Insignia scatter symbols land on reels 1, 2 and 3 then players must choose one of the symbols that landed on the reels, this will automatically reveal a random bonus win amount.

When three Contract scatter symbols land on reels 3, 4 and 5 then players must choose a target (each target is a major character that appears throughout the iconic Hitman video game series) to reveal a random bonus win amount.

Each target has a specific range of possible win amounts. The target bonus is multiplied by a random value. These targets and their potential win values are taken from the game's 'International Contract Agency Headquarters' and are as follows:

The higher the max value targets have, the more risk is associated with them, as you can possibly win the smallest amounts of money when choosing to terminate them.

When players land three or more 18 symbols on the reels they'll automatically trigger 18 free spins. During these free spins, all wins are multiplied by 2. This multiplier does not apply to Insignia or Contract bonus wins. All bonus features and expanding Agent 47 wilds can appear during this time. 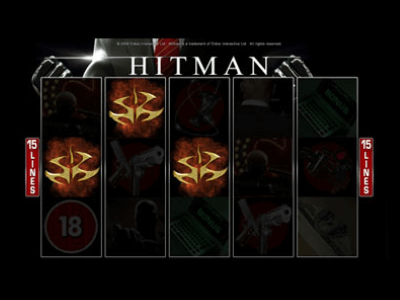 When three Insignia bonus symbols land on reels 1, 2 and 3 then players must choose one of the symbols, this will reveal a random bonus win amount. 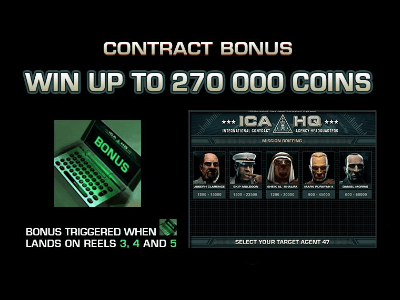 When three Contract bonus symbols land on reels 3, 4 and 5 then players can choose a target to reveal a random bonus win amount. Each target has a specific range of possible win amounts. The target bonus is multiplied by a random value. 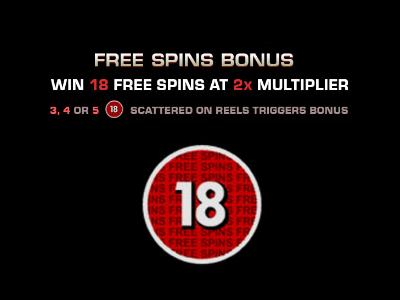 When players land three or more 18 symbols on the reels they'll automatically trigger 18 free spins. During these free spins all wins are multiplied by 2. This multiplier does not apply to Insignia or Contract bonus wins.

Don't let this game's advanced age and somewhat dated design put you off from playing it... This 2007 5-reel, 15 payline slot from Microgaming wonderfully pays homage to the classic video game of the same name.

You'll see all the hallmarks associated with Agent 47, the game's protagonist and antihero of the revered video game franchise. So if you're a fan of the game, espionage and other sinister things then you'll be more than satisfied with what's on offer here... We urge you to pull the trigger and give this classic title a go.

This game is a bit of a strange one, on one hand, we can't get over how dated it looks, it definitely has that early 2000s vibe about it, down to the fact that everything is boxy and a little bit plain, with just three of four main colours represented throughout the slot. However, on the other hand, the game symbols are well designed and you're in no doubt what kind of game you're playing, the theming has been perfected, especially when it comes to bonus features such as the Contract Bonus!

Low paying symbols include razor wire, a switchblade, poison and a syringe, a sniper rifle and pair of handguns. High paying symbols include a folded 100 dollar bill and three different portraits of Agent 47 in different situations, with the highest paying one showing him looking down the scope of a sniper rifle. The stake selection toll is made to look like the scope of a sniper as well, it's those nifty little additions that make us appreciate this slot.

You don't have to look twice at this slot to realise it's an old one. Players can select their stake by pressing a blue button on an action bar that runs along the bottom of the reels, they can make a spin using the red button to the right of it. That's genuinely all there is to this game, there's no autoplay button, nor is there a turbo button. What you see is what you get with Microgaming's Hitman.

This medium volatility slot has a fixed RTP of 95.72%, which is a little bit below the industry average. Considering this slot features no progressive jackpot this is slightly disappointing, but it could be much worse.

This game is one of those we'll categorise under 'old but gold', visually, it's not aged that well at all, but in terms of features and mechanics we're suitably impressed with what it has to offer. If you're a fan of branded slots then we'd highly recommend giving Hitman a spin.