It’s not long until the Grand National - but it’s still too long for us!

Considered one of the most famous racecourses worldwide and first started in 1839, the Grand National is one of the biggest horse racing events of the year. For three extraordinary days, there are several races including the Foxhunters Chase, Aintree Melling Chase, The Ryanair World Hurdle and The JLT Novices' chase.

Each of the races offers something different for fans of horse racing making it something to savour. This year, the festival starts on the 8th of April and runs until the 10th of April 2022. Sadly, that's too short for many enthusiasts which is why we've compiled a list of the best horse racing slots to experience the exhilarating feeling of horse racing any time you want.

Here are the best horse racing slots out there for you to play whenever you want. Place your bets and win on one of these online slots available at the best no wagering casinos. 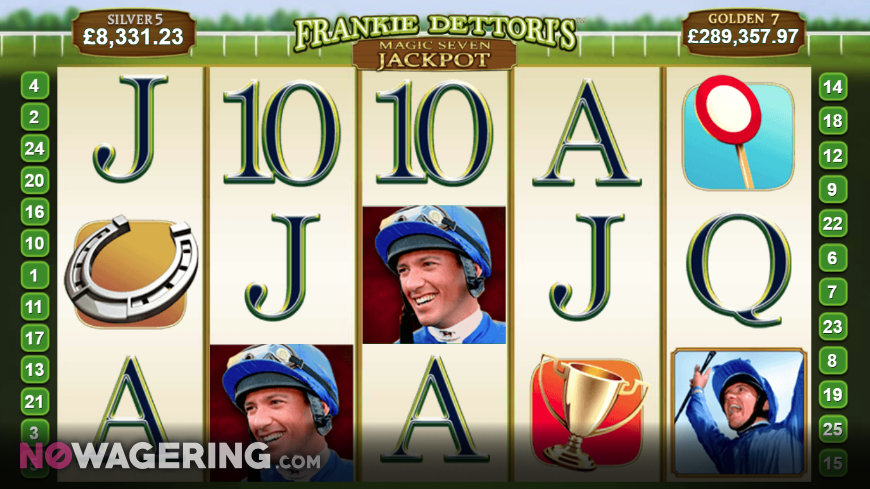 Dedicated to the iconic jockey, Frankie Dettori, and his magnificent feat of winning throughout his career - Frankie Dettori's Magic Seven Jackpot is quintessential for horse racing fans. It features 5-reels with 25 paylines with bonus rounds, free spins and two massive progressive jackpots. Horse racing fans will absolutely love the atmosphere of tension and suspense with actual video footage of some of Frankie Dettori’s best wins if they trigger the Magic Seven Bonus.

There’s no doubt that this slot is a must-place for horse racing fans as you get to live out the fantasy of being a famous jockey and experience horse racing at the forefront. This magnificent slot is the new and improved version of Playtech’s Frankie Dettori's Magic Seven with two absolutely life-changing progressive jackpots - the Silver 5 and Golden 7 jackpots. Surely, those are those spectacular returns that’ll make any horse racing fan happy. 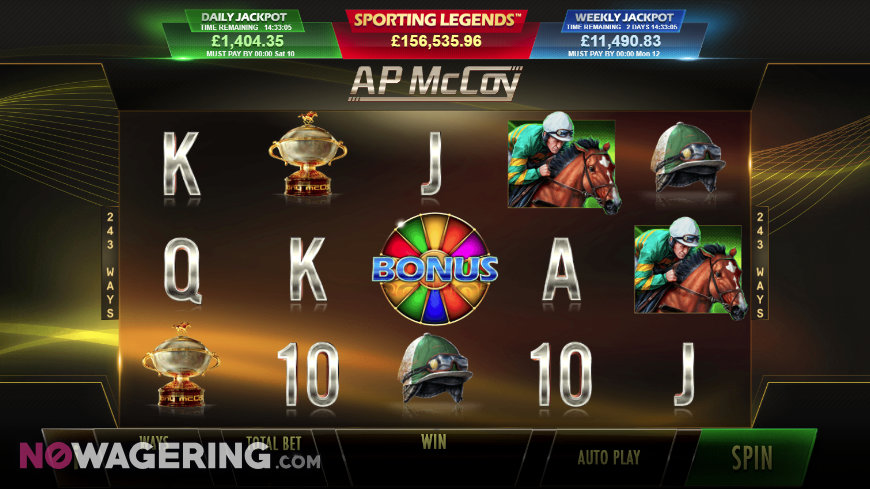 From one sporting legend to another, Playtech returns on this list with AP McCoy: Sporting Legends is based on the legendary Northern Irish jockey Sir AP McCoy. Playing on 5-reels with an outstanding 243 ways to win - this slot has all the modern features mixed in the thrill of horse racing. This adorned with the classic design and colour scheme make it sense like you are on a TV set in the 80s with McCoy himself.

Don’t be fooled into thinking you won’t have the astounding wins found in horse racing - there is a networked jackpot attached with three different pots. You could win a mega jackpot that can reach the millions, a 'must-drop' weekly jackpot and a 'must-drop' daily jackpot! Not only this but there is a bonus wheel with free spins, modifiers and cash prizes. If you like horse racing then you’ll love this slot and non-horse racing fans will love it as well. 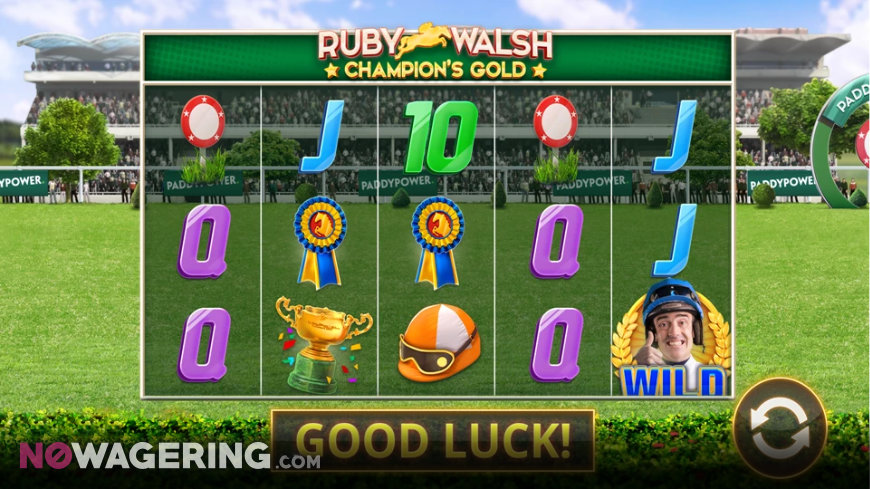 Based on Rupert ‘Ruby’ Walsh, the third most prolific winner in British and Irish jump racing history, this slot is one for horse racing fans. Horses gallop in the background as you spin to win the jackpot worth a whopping 1,000x your stake.

It’s definitely a slot for fans of Walsh as you’ll get to see him kiss the iconic trophy as the scatter symbol. As you race towards the finish line, you’ll get the thumbs up from the Walsh wild and get towards the jackpot cash prize. You can beat the bookie and race across the reels yourself in Cayetano Gaming’s Ruby Walsh Champions Gold. There is no other horse racing slot like this one! 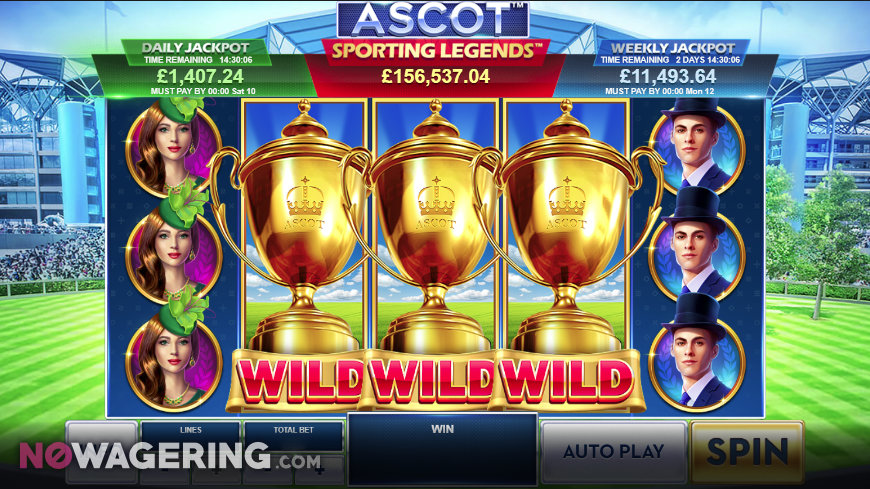 Now, this isn’t based on the Grand National, instead, it’s centred around the famous Royal Ascot course. Developed by Playtech, and part of their Sporting Legends Jackpot - Ascot: Sporting Legends plays on 5-reels with 25 paylines. You have 3 different types of wilds that represent the different cups - gold, silver and bronze - that can expand and multiply up to 8x!

Players can even add some class to their game with the High Society Free Games that give you the option to visit the exclusive free spins event. Ascot: Sporting Legends combines the sensation of horse racing mixed with the class of the Royal Ascot. It’s perfect for horse racing fans wanting a different experience before the Grand National. 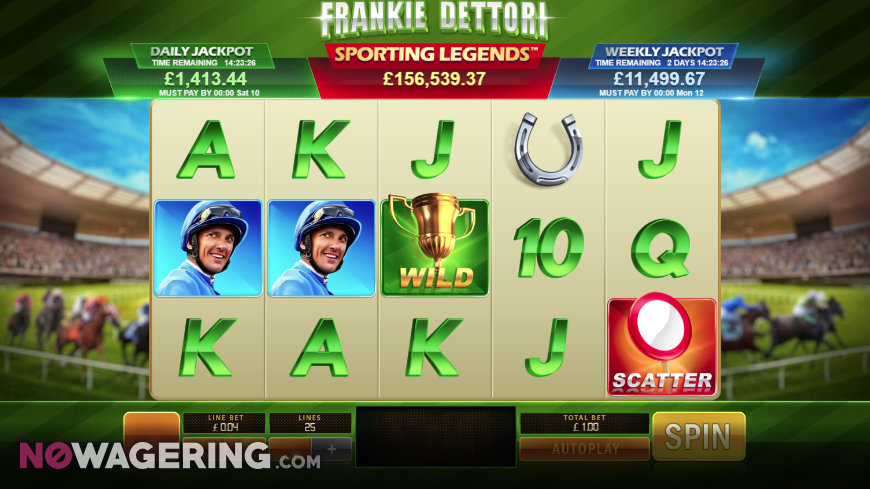 Every horse race fan is obsessed with Frankie Dettori and thankfully there’s another slot sporting the jockey icon - but this time with Playtech’s Sporting Legends progressive jackpot. Based on Dettori’s career as he won seven races in a single day at Ascot! With stills of Dettori himself mixed and well-known symbols such as lucky horseshoes, Frankie Dettori Sporting Legends is a slot that cannot be missed by horse racing fans.

It plays on 5-reels with 25 paylines but the real star has to be the Golden Derby Free Games. You back a horse during this bonus round and can win a multiplier of up to 3x. If that isn’t enough, then you can unlock Galloping Wild Respins which has an increasing multiplier of up to 7x. Everything about this slot is incredible and it’s the ideal slot to tide you over throughout the festival season.