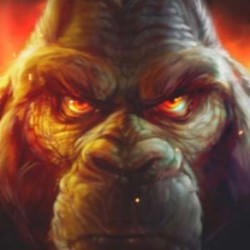 New York. The Big Apple. The city of dreams. These are just a few of the names for what is perhaps the most famous city on the planet. Every year, thousands upon thousands of tourists flock to this special city to feel some of the magic for themselves, and it seems no-one ever leaves disappointed. The same goes for the animal kingdom too, as King Kong liked New York so much he took climbing the Empire State Building to a new height, literally!

But now, by squaring off against this famous beast in the King Kong Fury slot over at PlayOJO, players will be in with the chance to make this climb themselves as the casino is giving away a VIP package which includes a 5 day trip to the big apple!

From the 26th to the 30th April, all players have to do is head over to the Reel Spinoffs at PlayOJO and join their King Kong Fury Reel Spinoff where there's £10K worth of prizes to be won! By topping the leaderboard you'll be taking away a 5 day (4 nights) stay in New York for 2 people which we're sure is going to be a trip to remember! For all those who place below this, don't worry, because there are plenty more great prizes to be had:

How To Take Down the Beast

Just head over to Reel Spinoffs at PlayOJO and join the King Kong Fury Reel Spinoff game. For every £1 you deposit, you'll receive a ticket into this game, and you can play as many times as you like. After you've joined, check the rewards section to claim your tournament spins which when played, will make your wins convert to points. From there, all you have to do is check the leaderboard to see if you're one of their lucky winners!

Don't miss the chance to show off your might, and start your climb on this enticing leaderboard.

There are no limits regarding the participation and players can buy as many tickets as they like.

Players can check out the full list of prizes on the official PlayOJO promotional page.

No winnings can be gained from any tournament spins in the King Kong Fury Reel Spinoff Tournament. These are solely for determining the position on the leaderboard.