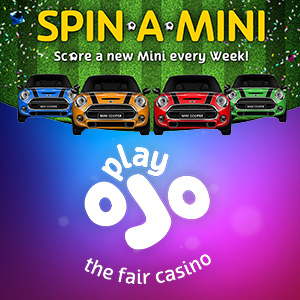 It's one of the classics of design, and a landmark of English engineering. Granted it's now a part of BMW, but the Mini manages to transcend ownership. Perhaps it has something to do with its characterful appearance, but the Mini has never lost its ability to turn admiring heads.

The Power Of Difference

Our friends at PlayOJO have lots in common with the Mini. Both like to do things against the grain. The original Mini was small but perfectly formed, and conveyed a personality that lumps of steel rarely did. That was new, different and welcome. As for PlayOJO, their bucking the industry trend of imposing any kind of wagering requirements is not just different, it's positively revolutionary.

They share the same values as us here at NoWagering. We're sure that many of you are also supporters of PlayOJO, as their platform puts the needs of its gamers to the forefront of their minds. In a further sign of their generosity and ability to establish new expectations of the online gaming industry, they are giving away 4 brand new Mini Coopers. Along with the very desirable other prizes, the prize pot adds up to a cool £80,000.

In their Spin-a-Mini Reel Spinoff, running from midnight June 14 until 23.59 July 11, it only takes a single ticket to be a winner of this game of the week. On the Ninja Master slot, 100 real money spins amount to 1 daily reel spinoff ticket. This ticket grants you tournament spins, which you access via the Spin-A-Mini Ticket Kicker. You simply play these tournament spins, with your winnings converted to points which you monitor against a leaderboard. We've always been supporters of free spin initiatives, particularly those which attract no wagering requirements at all, which are just the kind that PlayOJO are rightfully known for. As they're giving away £20,000 of prizes each week of this promotion, they're becoming as generous and they are considerate of gamers' rights.

The Scale Of Prizes

Four separate reel spinoffs run for 7 days each. These are:

There are no limits to participation, so you can buy as many tickets as you like

The model is a Mini One 3-door hatchback 1.2l petrol with manual gearbox and no extras

Winners can choose between a cash equivalent or the car