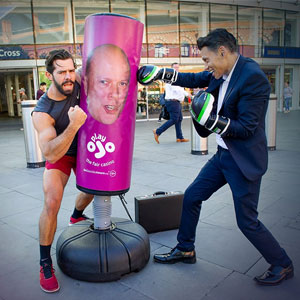 Our friends over at PlayOJO are always full of surprises, and their latest shindig is no exception to that rule. It shows they have their finger on the pulse of not just the casino industry, but current affairs generally. There’s seemingly no end to their talents.

Which brings us, naturally enough, to Chris Grayling, the current Secretary of State for Transport, except there seems to be no beginning to his talents for that job, as the trains have all but ground to a halt. So yeah, thanks for that Chris. Good job getting it all wrong.

In a diversion from their usual tracks, PlayOJO have not just noticed how difficult it is, in certain parts of the country at least, to get from one place to the next courtesy of a train, they’ve actually got amongst the travellers and conducted a survey into the repercussions endless delays and cancellations are having on commuters.

You can read in The London Post some of the survey’s findings, which of course make for grim reading for Mr. Grayling MP, who seems stuck in a waiting room of his own making when it comes to having a good idea about keeping the country heading in the right direction. Perhaps he could do with some help from none other than TOWIE’s Charlie King, who despite being a personal trainer to celebrities and reality TV star, probably knows one end of a train from the other in a way that would make The Right Honourable Member of Parliament for Epsom and Ewell – or Chris Grayling to his friends – green with envy.

For their latest promotion, PlayOJO took Charlie to London’s King’s Cross station, a place we’re not entirely sure Grayling knows exists, for the concept of a major train station seems lost on him. Anyway, while there, the chaps did the only decent thing imaginable in a state of train stasis, which was to stick an image of Grayling’s mug on a giant punch-bag, so that a load of frustrated commuters could take out their frustration on the man responsible for their misery in a way more appropriate than grievous bodily harm, which used to be the term used for ingesting one of British Rail’s famously fresh and delicious sandwiches.

None of which has got anything whatsoever to do with gambling, but then again, a train journey has become something of a gamble lately, except there are no winners. Chris Grayling, you’re stuck at a crossroads, but PlayOJO and Charlie King are travelling first-class.