We're absolutely delighted that one of the most iconic slot series of all time, Mega Moolah, has this month extended their line up of incredible jackpot slots by releasing two new games.

Fans have waited years for Microgaming to follow up on hugely popular titles Mega Moolah and Mega Moolah ISIS. Any game that has the opportunity to make countless players millionaires thanks to their world famous progressive Mega Jackpot is bound to be to leave players wanting more.

Having paid out an an unrivalled £79,000,000 to 12 incredibly lucky players in last year alone we can hardly say we're surprised that there was a huge appetite for a brand new title... Let alone TWO! 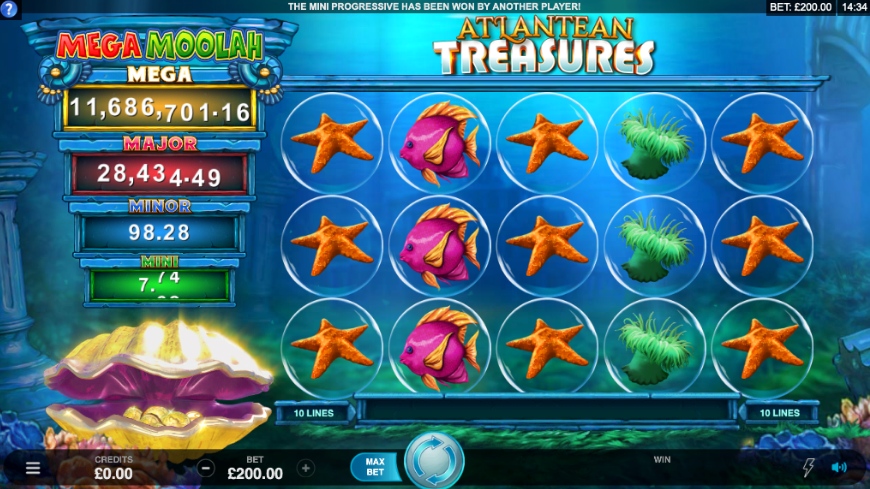 The first new release, Atlantean Treasures Mega Moolah is a complete departure from Mega Moolah in many respects, however it has carried over many of the hallmarks of the original which helped make it so famous.

This surprisingly relaxing deep-sea themed 5-reel, 10-win line slot has players dive into the depths of the ocean in search of the lost city of Atlantis where unknown treasures await.

As is the case with all Mega Moolah games players have a broad range of betting options and can wager as little as £0.10p and as much as £200 per spin if they so wish. What's more, Atlantean Treasures Mega Moolah pays all ways.

This title has 3 lucrative features built in that give players the opportunity to greatly boost their bankroll. Firstly we have expanding wilds, these mermaid adorned expanding wilds can appear on reels 2, 3 and 4 and can substitute all symbols in the game except for the progressive trigger symbol.

Secondly we have the respin feature. If players land one or more wild symbols on the reels then they'll automatically be awarded a respin. If this wild is expanded then it will locked in place and the remaining reels will respin. Landing additional wild symbols during this round will award up to a maximum of 3 successive respins.

The final feature is the one every Mega Moolah player dreams of landing... The jackpot feature! If players manage to get a progressive trigger symbol on reels 2, 3 and 4 then they'll collect pearls that are stored in a giant clam and be in with an automatic chance of triggering a spin of the famous progressive jackpot wheel.

The more your bet, the better your chances are of landing this feature.

Ultimately, in terms of features this game certainly isn't groundbreaking, it may not be filled to the brim with things we've never seen before, but does that matter when it has the Mega Moolah Progressive Jackpots built in? 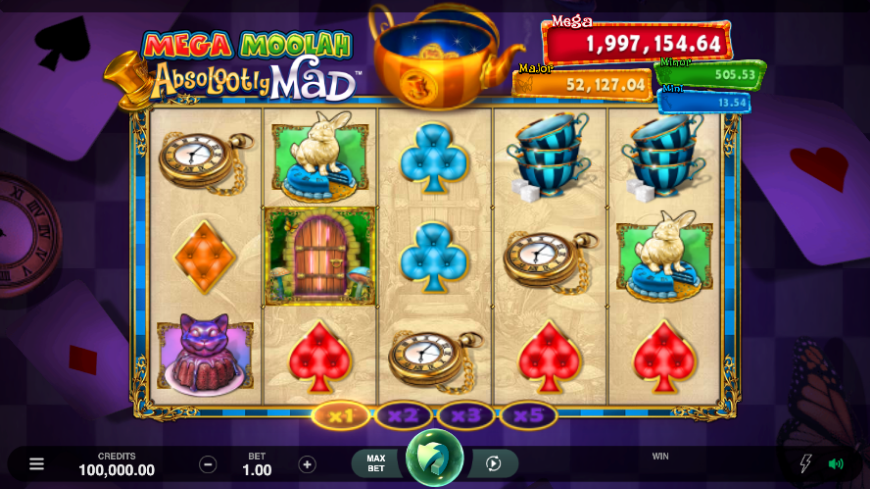 This game certainly outdoes Atlantean Treasures in the visuals department, the designers have done a fantastic job at really capturing that CS Lewis madness that so many slot game developers have tried and failed to emulate in the past.

This game differs from its sister title due to the fact that it has 5-reels and 243 win lines. Feature-wise this slot isn't at all bad either, firstly there's Rolling Reels which sees winning symbols dissolve, allowing new ones to fall down and take their place.

This feature also includes a Multiplier Trail like in Gonzo's Quest in which each successive win is multiplied by 1x all the way up to 5x.

Secondly we have a classic free spin round that's triggered when 3 scatter symbols land on the reels. Again, this comes with a Multiplier Trail, however this time it's much bigger with multipliers of 3x, 6x, 9x and 15x.

Players receive a total of 8 free spins, however this can be extended up to a huge total of 48 with some luck.

Of course, you guessed it... The final feature of Absolootly Mad: Mega Moolah is the jackpot feature! Players can launch this feature when they land wild symbols that are collected in a golden teapot above the reels. Like all Mega Moolah games the Jackpot Wheel (Known as the Mad Cuckoo Jackpot Wheel) is randomly activated.

We'd highly recommend giving both of these Mega Moolah titles a spin, however if we had to pick one of the two we'd opt for Absolootly Mad, as it just about takes the edge when it comes to bonus features.

Where can I Play Mega Moolah online slots?

If you're ready to go for this mammoth jackpot then why not try Mega Moolah slots on these no wagering casinos that generously offer wager free spins, where you'll get to keep what you win without any nasty hidden terms such as wagering requirements!