This game is themed on the iconic TV game show and sees players take on the banker in a bid to get their hands on one of four progressive jackpots, as well as a whole host lucrative cash prizes on offer. 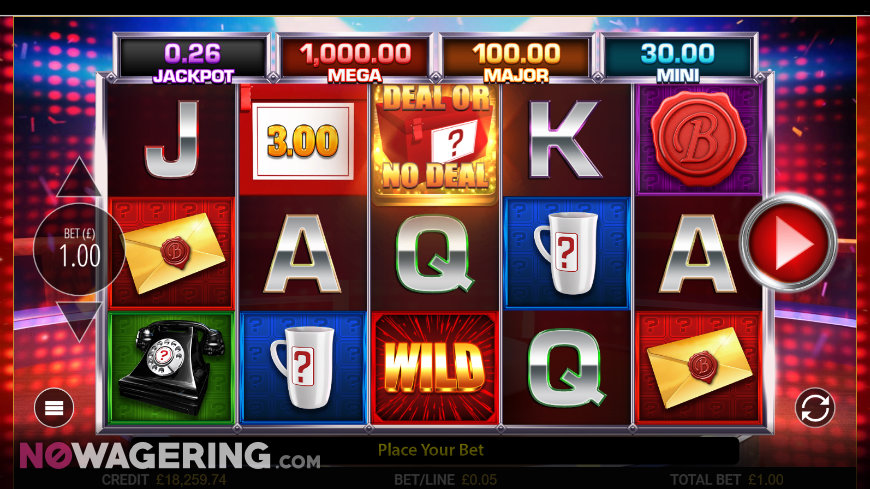 What are Lightning Spins™?

If you haven't heard of Lightning Spins™ before, this is Blueprint Gaming’s newest slot feature. They're activated when six or more Lightning Spin Scatter symbols land on the reels during normal gameplay.

Players are then given a minimum of three free spins to win lucrative cash prizes, as well claim one of the four in-game progressive jackpots. Lightning Spins™ see any scatter symbols that appear on the reels award a cash value and will also reset the remaining free spins to three.

Revealing the Mini, Major or Mega jackpots from a scatter symbol guarantees a payout matching the cash pot, while a full window of Lightning Spin Scatters awards the main jackpot prize.

What other features does Deal or No Deal Lightning Spins™ offer?

Deal or No Deal Lightning Spins™ is notably the first Blueprint Gaming title to feature their brand new Lightning Gold Spins symbols. These see the player pick up small wins that build themselves up into much larger prizes during bonus rounds, a feature many enthusiasts are no doubt looking forward to sinking their teeth into.

Players should also keep an eye out for the all new Banker's Bonus which sees Lightning Spins™ awarded to the player should they choose to take a DEAL at any time during the Deal or No Deal bonus round after landing 3 or more Bonus Symbols.

Director of Marketing and Relationships at Blueprint Gaming, Jo Purvis spoke excitedly of the release saying: “Deal or No Deal is historically one of the most popular brands within slots gaming across both retail and online, having been a crowd-pleaser for over 10 years.

"We’ve enjoyed huge success with our versions over the years and we’re excited to reveal this latest addition to the Deal Or No Deal catalog.

“Deal or No Deal Lightning Spins™ delivers a fun new experience for players as they attempt to beat the banker with additional jackpots and cash prizes to be claimed through our new bonus feature.”

Play Deal or No Deal slots at these casinos:-