The best online slots with no wager free spins

There are hundreds, if not thousands of truly brilliant online slots out there that have been created by the best and brightest minds in the industry, all filled with features that make them profitable in a way that most of us could never have imagined.

Many of these games are ready and waiting to be played as part of a potentially lucrative casino welcome offer, and here at No Wagering we champion fair and honest no wagering casinos that offer players a generous number of no wager free spins.

So if you want to keep what you win without having to experience the sheer pain and frustration of working your way through any unwanted and unachievable wagering requirements, then it's well worth heeding our advice and checking out our top online slots with no wager free spins.

These fantastic online slot games are all tied to a no wagering casino's welcome offer, so you can rest assured that you're getting a fair deal from a fair operator. Without further ado, here's our favourite titles waiting to be played right now!

Who doesn't love a classic? Playtech's Age of the Gods God of Storms fits the bill perfectly, it truly is timeless. Not only is it iconic, but it also has the chance pay out handsomely whilst you're making the most of your wager-free spins.

This 5-reel, 25 win line mythology inspired title is just one in a series of much loved games that have delighted fans since way back in 2016... So if you find you're enjoying this one you'll be delighted to hear there's even more to play.

Yes, it's an old slot, but considering popular no wagering casinos such as Betfred are still actively choosing this game as part of their welcome offer tells you absolutely everything you need to know. Clearly Playtech did something right when they created Age of the Gods God of Storms, because it's still entertaining thousands of us years after its initial release.

This game really does look and sound like the real deal with the recognisable marble reels sitting in front of a harbour within the walls of an ancient city. Seagulls squawk and the waves gently crash against one another as the reels spin.

Don't get feeling too relaxed though, when the bonus features kick in this game really ramps up a notch.

The selling point of this game is definitely the Wild Winds Respins feature. When players land the Argo, a ship symbol that takes up an entire reel, the feature is activated. Aeolus, a mythical God appears and blows the sails of the Argo across the reels from right to left, causing respins with shifting stacked wild symbols AND an increasing win multiplier. This can ultimately lead to HUGE multipliers that could reach into their thousands.

Play Age of Gods - God of Storms with wager-free spins:- 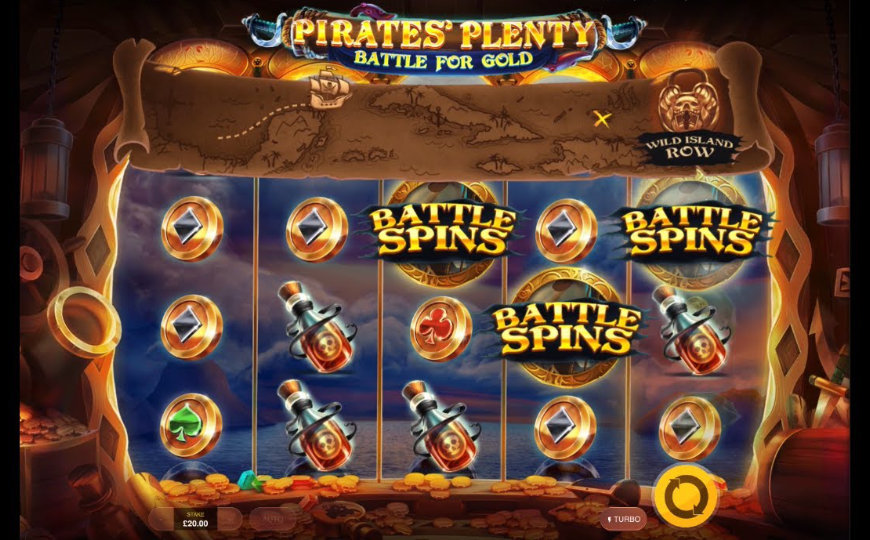 Ahoy there! Pirates' Plenty 2: Battle For Gold is legendary slot developer Red Tiger Gaming's 100th official online slot release, and this game is more than deserving of its landmark status.

This wonderfully designed 5 reel, 20 win line slot is filled with features that can really boost your balance. Our pick of the bunch is the Battle Spins feature that sees you win a random number of free spins whilst the game's protagonist Captain Blackbeard throws sticky wild bombs onto the reels that lock into position for the entire duration of the free spins.

If this wasn't enough, cannonballs can also be fired at the reels which add additional wilds or extra free spins into the mix. If you're lucky enough to land this feature at the same time as the Wild Island Row feature than you'll even get sticky multiplier wilds.

With a hefty number of lucrative bonus features included in this pleasing pirate-themed online slot, we think you'll find this title more than agreeable, especially considering it has an RTP of 96.07%. It might take a bit of patience, as is the case with any volatile slot... But you'll find that this game gives something back for the time you've invested.

All-in-all It goes without saying, Pirates' Plenty 2: Battle for Gold is simply brilliant. It has a hell of a lot going for it. Once you get to grips with the gameplay then you'll quickly fall in love. Especially when you realise you have the opportunity to win 5500x your original stake! We see absolutely no reason why you shouldn't pick this title as your chosen game when redeeming your wager-free spins.

Finn and the Swirly Spin 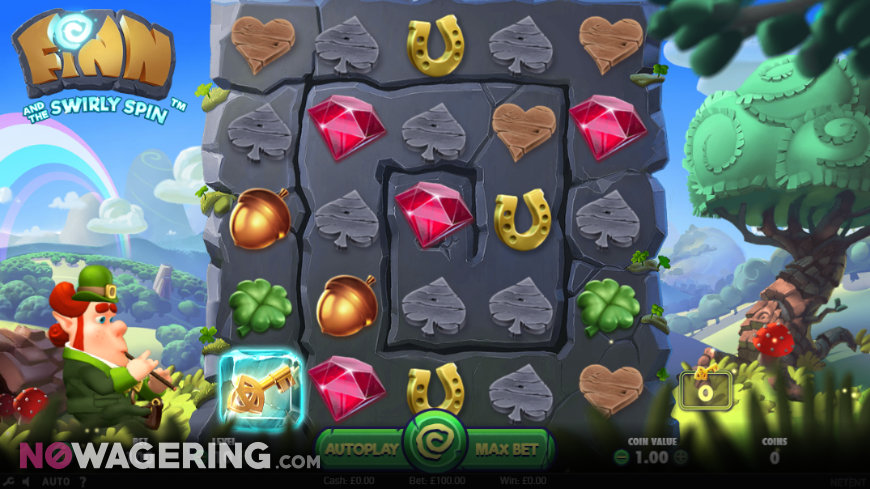 We're just going to put it out there right now... Finn and the Swirly Spin is not your typical online slot game. In fact, it couldn't be further from a traditional slot game if it tried... And to be honest, that's what we love about this truly unique NetEnt title.

Played on an unfamiliar swirling 5x5 grid, this slot has a cluster pays mechanic similar to the one found in Gonzo's Quest, which means once one winning spin is registered, many more could potentially follow. This is one of those mechanics that can prove to be hugely lucrative if a chain of wins are registered. Getting a chain is made much easier in Finn and the Swirly Spin because wins can be registered in any direction, both horizontally and vertically.

There are a number of quirky bonus features that add to what was already a thrilling title, these include:

You'll also notice that on every single spin you make a key will appear as the very last symbol on the swirly reel. If you mange to get this key all the way into the middle of the swirl it will work towards unlocking a free spin bonus round.

If you want to join Finn the Leprechaun and take on the swirly reel then head over to the aptly Irish themed no wagering casino Pots of Luck where you can get a number of wager-free spins on this brilliantly creative NetEnt slot. 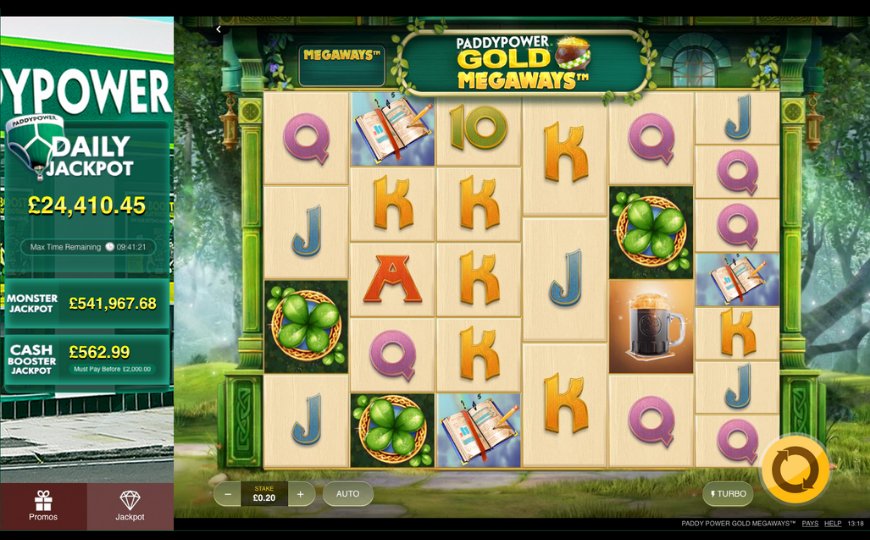 Who doesn't love a good Megaways slot? Paddy Power Gold Megaways has an incredible 117,649 win lines, meaning that there are more ways than ever to win big when playing this online slot.

This unique branded title has a Lucky Spins bonus feature, this is triggered when players land three or more Lucky Spin symbols on the reels. You'll have to pick one of three toadstools that reward either: Random Wilds, Wild Stacks with up to 7x multipliers or Lucky Ways, which awards up to six of a kind of any random symbol.

As you'd expect from Paddy Power, a quintessential Irish bookmaker, this game has heavy Irish theming that genuinely looks great. Many developers often go overboard with this art style, but Paddy Power Gold Megaways gets it just right. We're not offended by an overused green colour palette and there aren't too many leprechauns making an appearance!

With three HUGE jackpots linked to this game, a Daily Jackpot, Monster Jackpot and a Cash Booster Jackpot it's really easy to see why so many online slot enthusiasts flock to this incredibly popular Megaways variant. 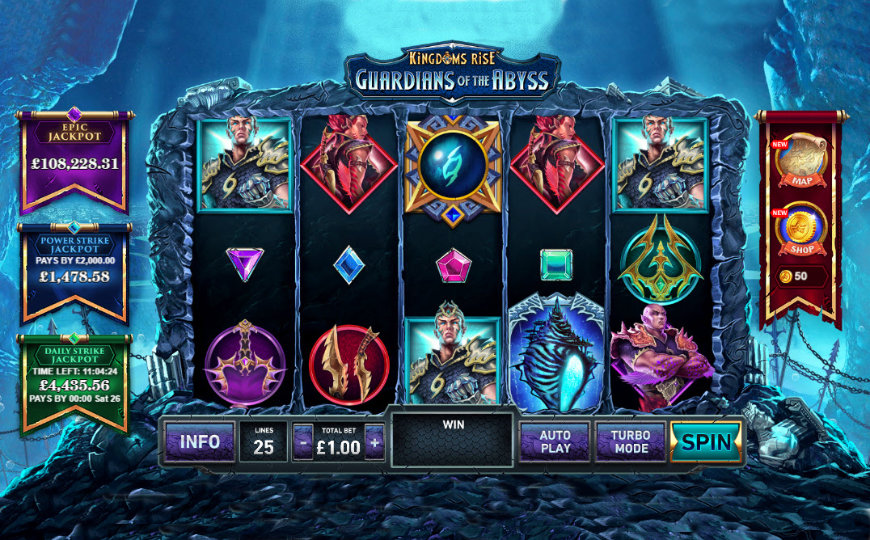 This revolutionary and innovative slot series is the brainchild of developer Playtech. It offers players the unique opportunity to save their in-game progress and carry it over to one of SIX Kingdoms Rise games. These are:-

Players can use the in-game map to switch between titles seamlessly if they feel like trying a different title.

Each game has its own unique theme, design and distinct bonus features that makes each stand out from the next. With every successful spin of the reels players receive tokens which automatically save and are tied to that players casino account. So whenever you return you'll still have the same amount of tokens you earned last time you played the game.

Tokens are only saved to one casino account. For example, you cannot start playing Kingdoms Rise on Paddy Power and continue from where you left off on PlayOJO.

These tokens can be used to access a feature store that automatically unlocks bonus features in your chosen title. The more tokens you have, the more lucrative the bonus feature.

With features such as a bonus wheel, free spins with roaming wilds, spreading wilds and random multipliers just to name a few this incredible series is well worth playing. If that wasn't enough the Kingdoms Rise series ALSO comes with three networked jackpots that often reach into the hundreds of thousands of pounds.

We genuinely mean it when we say that we expect this game to be as popular as the Age of the Gods series one day. It has all the ingredients of an iconic online slot series.