Get no wager free spins on your favourite online slots

There are some incredible games out there that are just synonymous with the phrase online slots. When you think of those fast spinning brightly coloured reels, a handful of hugely popular slots spring to mind, titles that can be found at almost every reputable online casinos across the internet.

These games have all cemented their status as an icon of the industry, whether that be for their innovative bonus features, gorgeous design or even their sheer simplicity. It's likely that you'll have come across all of the titles in this list through casino welcome offers, as casinos often like to showcase the very best games when it comes to luring new players in.

Remember, you keep what you win with these spins, so start scrolling and begin raking in those wager-free winnings! 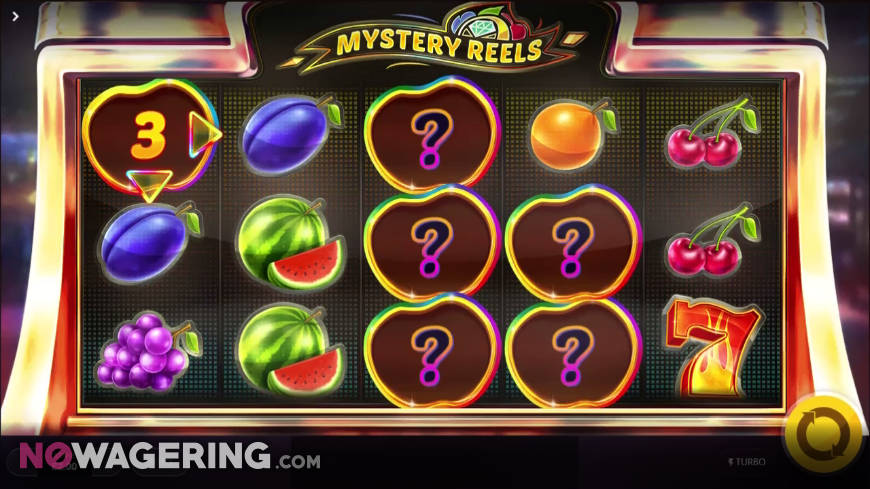 Mystery Reels is a jazzy 5-reel, 20 win line fruit machine inspired slot from Red Tiger Gaming. It's all about the Bonus Wheel with this slot! Everything revolves around the wheel, which makes this game quite unique in comparison to other popular online slots. There's no free spins round, no sticky wilds and no scatter symbols! Forget everything you thought you knew about slots as this will change your perception.

The amount of wheels you land on the reels directly corresponds with the amount of spins you'll get to make. On this wheel are several segments that award the following prizes:

If you happen to land the Mystery Symbol on any of the reels during normal play then you'll find that any symbol on the reels can be cloned and the Mystery Symbol will spread across the reels both vertically and horizontally. The amount of times the symbol is cloned depends on the randomly generated number in the middle of the symbol, for example, if the number is 3 then the symbol will move 3 times horizontally and 3 times vertically.

This quirky game can be found at a number of popular no wagering casinos including Betfair and Paddy Power, and the welcome offers below will grant you with wager-free spins that can be used to play on Mystery Reels... 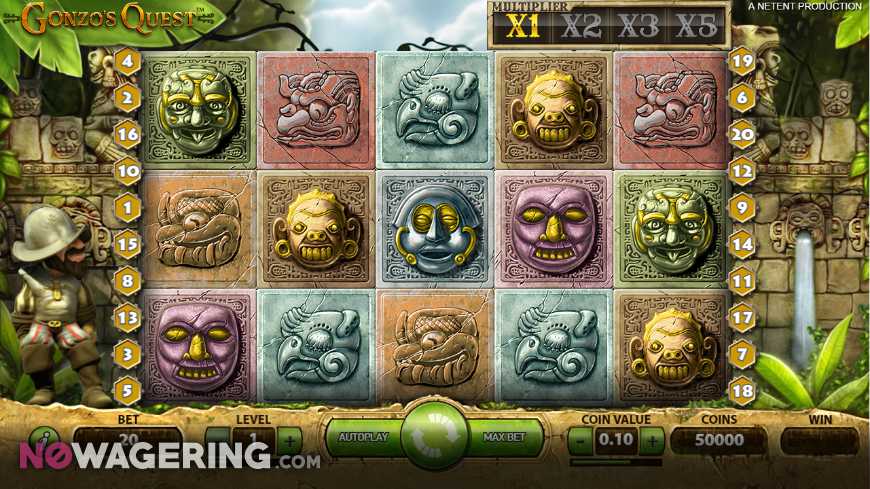 If you're looking for adventure then look no further than Gonzo's Quest. This quirky 5-reel, 20 win line online slot transports you to the heart of the Aztec jungle in search of the mystical city of Eldorado. You'll be joined on this quest by Gonzalo Pizarro, more commonly known as Gonzo!

After watching an incredibly engaging introductory video that sets the scene beautifully, you'll be taken to the main game screen which sees the reels sit in front of a golden temple filled with unimaginable treasures. The famous bearded Conquistador will wander around and perform random actions from the moment the game begins, so keep an eye out for his antics!

In terms of bonus features, the one you're really going to want to look out for is the free falls feature. It's essentially a free spins bonus that is triggered when you land three golden scatter symbols. A multiplier between 3x and 15x will increase as you register a winning combination. This feature is even better when you realise it's possible to trigger another free falls round during your original bonus.

This slot is right up there in terms of popularity! Players and casinos alike can't get enough of this quirky game, and for good reason. If you're tired of the same old slots using the same old formats then Gonzo's Quest might be the game for you. If you fancy some spins on this slot then why not try Jackpot Jones or Scorching Slots?

From one popular adventure themed title to another! Renowned online slot developer Play'n GO may well have been on the receiving end of some criticism due to the fact that their 2016 release Book of Dead takes some inspiration from similar titles, but when they do it better than the original, who can really say that they care?

This atmospheric 5-reel, 10 win line slot is set in what looks to be an ancient Egyptian tomb adorned with golden pillars and ancient hieroglyphics, a tense drumbeat gently builds up in the background as soon as this slot loads, which really sets the tone for what's to come.

In terms of bonus features the main attraction is of course the Book of Dead free spins. This round occurs when the players land 3 book scatter symbols on the reels. Not not only are there a tantalising 10 free spins to enjoy, but also the opportunity to benefit from a special expanding Rich Wilde symbol that greatly enhances your payout during the free spins round.

If players wanted a little bit more excitement in their gameplay it's fair to say Play'n GO have delivered with Book of Dead. After every single win players are offered the unique opportunity to gamble their winnings on a simple card game for the chance to multiply them by 2x or 4x.

There's no denying it, this slot is a tried and tested classic and it's no wonder so many studios have followed suit with their own iterations. Looking to join Rich Wilde on his epic adventure for ancient Egyptian treasure? Check out Betsafe and PlayOJO for a number of low wagering and wager-free spins on this brilliant online slot.

Play Book of Dead with no wagering free spins:-

You'll have heard us say it before, and we'll say it again... The Age of the Gods series is absolutely timeless! The very first Age of the Gods slot was released back in 2016 by veteran developers Playtech, fans have been hooked on this iconic series ever since.

Such has the insatiable demand for more been, Playtech have found themselves rolling out over ten new Age of the Gods slots in the last few years, an incredible feat when you think of how much time and effort goes into making each and every game.

It's difficult to pin-point exactly what it is about Age of the Gods that gets people ticking as each game has something different from the next. The one thing they all have in common is that they're filled with innovative and lucrative bonus features such as increasing win multipliers, free spins and stacked wilds... Just to name a few.

If this wasn't enough to get your excited about Age of the Gods then wait until you hear this... All of the Age of the Gods online slots are linked to an incredibly generous networked jackpot that reaches into the hundreds of thousands of pounds, so you could be in with the chance of winning the Power, Extra Power, Super Power or Ultimate Power Jackpot.

This game is a must play for any true online slots enthusiast. If you're looking to play any of these games with wager-free spins or low wagering free spins then you can find them at Betfred and Casino.com.

Play Age of the Gods with no wagering free spins:- 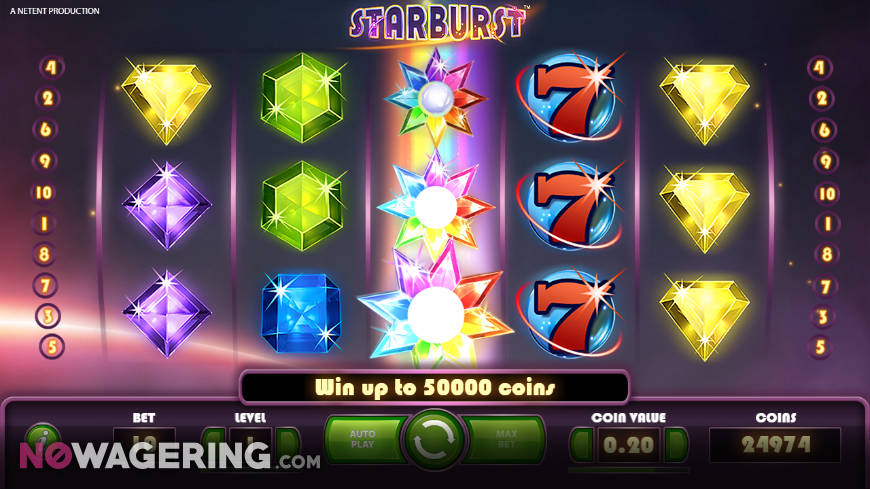 We couldn't produce this list of popular online slots with no wagering free spins without including NetEnt classic Starburst. Any battle-hardened bonus enthusiast will know plenty about this game as it can be found at so many different online casinos as part of their welcome offer, it really is that popular!

Unusually, this game isn't filled to the brim with huge and mind-blowing bonus features, if anything it's surprisingly modest, which makes this online slot's popularity a little bit mind-boggling! However once you start playing it's not hard to understand why so many have been mesmerised by this cosmic slot.

Starburst is an easy to follow 5-reel, 10 win line game with an RTP of 96.09%. The only bonus feature you'll find in this game is the Starburst Wild feature which sees a special symbol land on either reels 2, 3 or 4. This special symbol expands to cover the entire reel whilst also triggering respins.

As it's the only bonus you'll find in this slot, it crops up quite often meaning you can expect some healthy payouts more regularly than in other games. For what it lacks in features it makes up for in charm. If you're after wager-free spins on a no nonsense, easy to understand online slot then Starburst is without a doubt the game for you.