Since this epic series began in 2016 Playtech have produced an incredible catalogue of thrilling Greek mythology inspired classics under the Age of the Gods banner.

If you're a fan of jackpot slots filled to the brim with exciting features such as multipliers, stacked wilds and free spins then this series is for you.

Age of the Gods Free Spins No Wagering

Get free spins on Age of the Gods with no wagering requirements and keep what you win!

Most wager-free spins handed out by casinos can only be used on certain slot games. So if Age of the Gods is your game of choice then you're in luck, because the following casinos are offering players free spins on Age of the Gods with no wagering requirements! Now you get to use your free spins on a game you're familiar with, and keep what you win while you're at it!

There are currently no such deals available in your country.
Browse all Irish Casinos.

Best Casinos to Play Age of the Gods

Age of the Gods Features

Each game in the series gives you the potential to win a titanic amount that’ll even rival the Gods themselves. Impressively, most games in the series have four jackpots to be won during every spin.

There is estimated to be someone winning the Ultimate Power Jackpot every 6 weeks with an average pay out at £470,000. An almighty jackpot like this explains why the Age of the Gods series is without a doubt the most famous online slot series of all time. 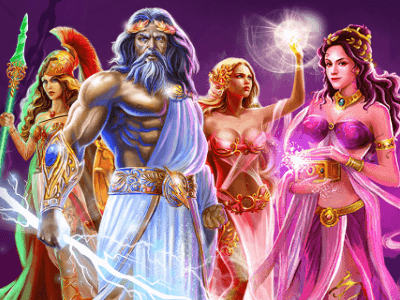 You’ll find the mythical theme that’s right for you with each game based on different myths. You can focus on Norse mythology with Gods Norse King of Asgard or on a number of Greek myths. 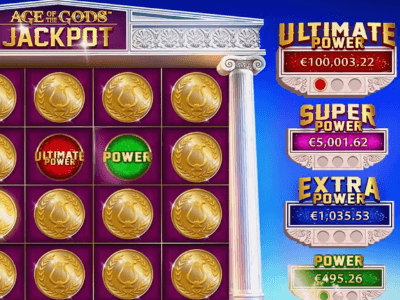 Age of the Gods Review

Everyone within the online slot community has heard about the legendary Age of the Gods series. Developed by Playtech in 2016, this series hosts over 20 different games all with a focus on mythical figures throughout history.

Inspired by ancient Greek mythology, the first game in the series, Age of the Gods, showcases their impressive Progressive Jackpot with different tiers. In this title, you team up with Olympians Athena, Zeus, Poseidon and Hercules in free game bonuses to gain you that mighty win. From free spins to multipliers - it has it all.

Slot enthusiasts were blown away by the power of Age of the Gods. So much so that Playtech expanded the brand and created even more games that were choked full of creativity and chances to win at the Progressive Jackpot. For players wanting to experience the beauty and might of ancient Greece with Playtech’s famous four-tiered Progressive Jackpot, these are the titles you should check out:

Playtech sealed their renowned series with their Age of the Gods Progressive Jackpot that’s available in most of the titles. Players are faced with 20 gold coins and must turn them over until they reveal three of a kind. Ultimately, this determines which jackpot they have won and remains the same throughout the Age of the Gods titles.

Expanding Age of the Gods

Whilst many adore the format of typical Age of the Gods’ games, Playtech decided to expand and give more options to players. Age of the Gods Athena vs Ares is set within ancient Greece but forgoes the Progressive Jackpot. You play just like any other slot but have the choice to choose either Athena or Ares as your champions.

Age of the Gods King of the Underworld contains no Progressive Jackpot, but gives players the chance to win up to 10,000x their stake. So you can journey to the Underworld and enter two bonus games, Gates of Hell and Thread of Fate, to uncover the cash prize.

If you want something mythical but less surrounding Greek Myths, then Age of the Gods Norse King of Asgard is one to check out. It has the same game mechanics as the others with a Progressive Jackpot but surrounds Norse mythology instead.

For those wanting the experience but in a live setting, then Age of the Gods: Gods of Storm Live is one you should visit. They even have Age of the Gods: Roulette that focuses on the game of roulette rather than slots. There is literally something for everyone in the Age of the Gods series.

A Series Unlike Any Other

With its mesmerising artwork choice in creating beautiful characters that just light up the screen to innovative gameplay, the Age of the Gods series is a must-play for any slot fan. There is so much choice and variety that it will suit any type of player.

In the beginning, Age of the Gods may have started as a solo game but now it’s a full on empire of entertainment. Regardless of what you are after in a slot game, they’ll be something here for you.

Slot games in the Age of the Gods series