Iconic cartoon duo Rick and Morty have been immortalised in a brand new Megaways slot game developed by Blueprint Gaming. The hugely popular Adult Swim show is the latest television show to take the leap from our screens to slots, following in the footsteps of other shows such as Family Guy and American Dad.

Why have Blueprint Gaming chosen Rick and Morty?

Unless you've been living under a rock for the last decade you'll be well aware of Rick and Morty.

This controversial adult cartoon has won the hearts of fans worldwide when it was initially released back in 2013, with viewers particuarly falling in love with protagonist crazed scientist and family man Rick Sanchez and his Grandson Morty.

The show, which is now in its fourth series, has gone from strength to strength over the years and it's certainly comes as no surprise that it was licensed for its very own slot game.

As much as we love watching Rick travel through outer-space and the wider universe with Grandson Morty, we have to admit, we were a little bit more excited to finally play this game than we were for the latest episode of the show itself!

What can you expect from Rick and Morty Megaways? 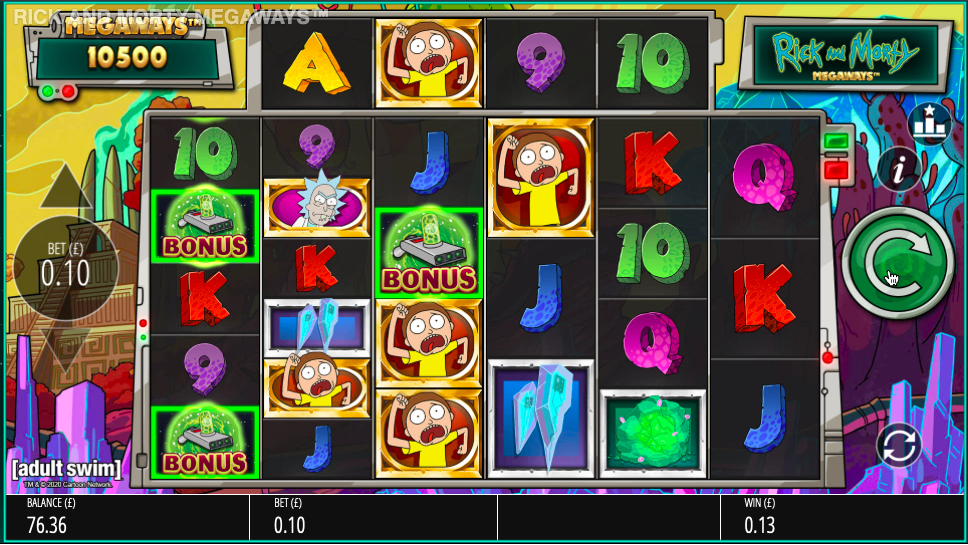 Considering this is such a big name title we thought it'd be rude not to give this unique branded slot a spin ourselves at Videoslots, one our favourite no wagering casinos.

From the moment we hit play we felt as if we were transported straight into the show. The artwork behind the reels mimicked that of the television show and the symbols were all instantly recognisable with Rick, Morty, rick's portal gun and Ice T all making an appearance.

The music was a strange choice, but it certainly worked... Blueprint Gaming have gone for a slow jazz version of the shows theme tune. At first we hated it, as it wasn't at all what we were expecting to hear... But after a few spins we grew used to it and we even found ourselves tapping along to the beat.

In terms of gameplay, you get absolutely everything you'd expect from a quality Megaways title, it has 6 reels with between 2 and 7 rows on each. There are also four special 4 symbol lined across a horizontal row at the top, as is often found in these titles. The rows alternate on each spin which gives players the classic Megaways 117,749 to win.

Rick and Morty Megaways also includes our favourite slot game feature, cascading reels! This means players can enjoy multiple wins on just one spin as symbols are removed from the game to make way for new ones.

Rick and Morty Megaways is filled to the brim with features, as we'd expect from any new Megaways title.

First up on our list of features are mystery symbols... If a whole host of mysterious looking boxes land on the reels then you're in luck as they'll open up to reveal a set of symbols that greatly increase your chances of landing a winning combination.

Secondly we have our traditional scatter symbols (Which are shown as portal guns). Land four anywhere on the reels and you'll automatically trigger the feature picker option which allows players to choose from one of four free spins features: 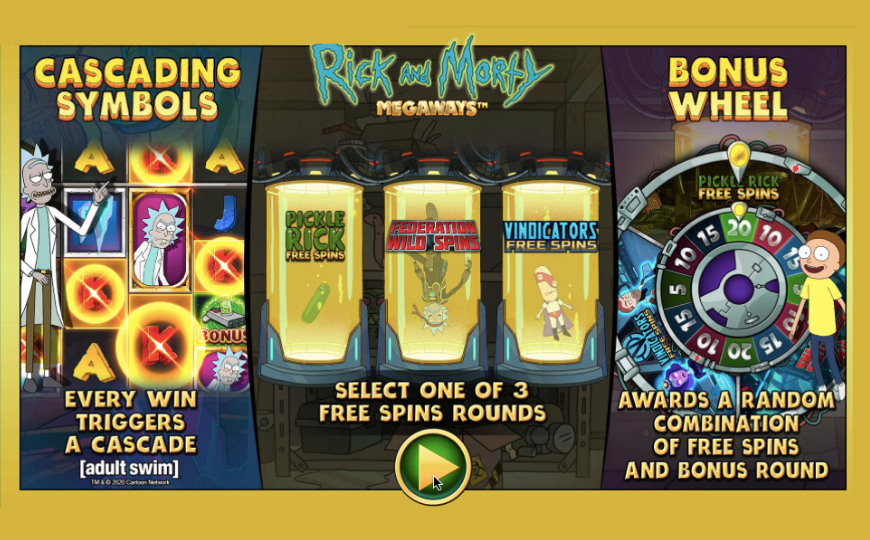 If players are lucky enough to land more scatter features during any of the bonus rounds then even more free spins will be awarded, making this game VERY profitable with a bit of luck.

This game also includes a bonus buy feature for players not in the UK. This feature allows players to pay 150 times the total bet to go directly to the Mystery Free Spins Wheel with 5, 10, 15, or 20 free spins.

Our thoughts on Ricky and Morty Megaways

We genuinely believe that this is easily one of the best Megaways titles of 2020, it certainly outshines every branded slot game that has come before it... We'd be hard pressed to find a branded slot game as well made as this one.

Hopefully Blueprint Gaming have set the standard for branded slots this decade with Rick and Morty Megaways, our hats go off to you Blueprint because we thoroughly enjoyed this game!